Features
The Voice
Fiction – Then Beggars Would Ride

?Lilium Enchantment,? Val says as she puts a bulb into the hole she has made with her hands and covers it with soil. Val and her mother, Rhea, are planting lilies in the back garden on the Saturday after the long weekend in May. Rhea used to know the Latin names for almost every flower, but now Val has to remember most of them for her.

?Pat the soil, like this,? Val says, showing Rhea how to flatten the soil covering the newly planted bulbs. Two years ago, Rhea planted the bulbs too deep and the flowers never grew. That was the first sign something was wrong; Rhea always had a green thumb and her garden had always been beautiful.

Rhea gives Val a blank look and then stares at her daughter’s hands as Val pats the soil. Today has been what Val calls a Pollock day, after the print by Jackson Pollock Rhea gave to Val on her thirty-sixth birthday. On Pollock days, Rhea exists in confusion; she remembers little or nothing and is baffled by even the most routine tasks. On this particular Pollock day, she had put her pants on inside out and her blouse on over her sweater. Val had to help her change, dressing her like a child.

This is the second year Val has been taking care of her mother. Two years of the Game Show Network and neurotic hosts shouting ?Double Whammy!? or ?C?mon down!? Two years of taking Rhea for short walks transformed into epic journeys by her need to wear, regardless of weather, scarf and toque, winter boots and gloves, and a winter coat with the collar turned up around the neck. Two years of questions: ?Who are you? Where am I? What day is it? What month, what year??

Once in a while, Rhea asks, ?Where’s my baby?? Val is an only child and knows the baby her mother is asking about is herself.

It was on the third night that Rhea noticed the pattern on the pillow sham. Despite having slept on the same sheets for as long as she could remember, perhaps all of her 15 years, she had never really looked at the pattern. The sham was mostly white with a sprawling design of pale green vines. As her father lay down beside her she saw that pale blue flowers dappled the curly green lines.

?This is your fault,? her father said, whispering in her ear. He had said the same on the first two nights and, unable to account for her mistake, Rhea nevertheless felt shame burning in her cheeks. Her fault, this pain. Her fault, this degradation.

The pillow sham felt cool against the heat of her face and she found herself staring at the delicate blue flowers again, hidden from her all these years and finally revealed, on this night, amidst the confusion of green vines.

Sometimes Val’s father had come into her bedroom at night. She will never forget the sound of his breathing. He made a sort of low grunt each time he exhaled, as if his throat were closing and he were about to choke. In the quiet, early morning hours, there was no escape from the sound. 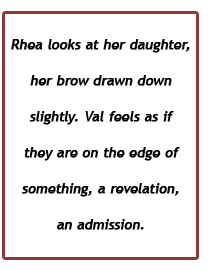 ?Mom, you okay in there?? Val asks, trying to ignore these unwelcome memories. Val and Rhea have been in the public washroom at Zellers for the length of time it has taken the in-store audio system to cycle through five instrumentals, all seeming to feature Kenny G. Shopping for comfortable shoes with Velcro instead of laces has taken twice as long; according to Rhea, all of the shoes were too tight.

?Are you sure you don’t need any help?? Val knows her mother will not reply. They have replayed this scene many times before and the outcome is always the same: Rhea locks herself in the toilet and refuses to respond to Val’s enquiries until Val finally has to climb under the door into the stall. As Val drops to her hands and knees, she is surprised to hear the lock disengage. Rhea pushes open the door and stands before her daughter, shoulders bent, watery eyes imploring. ?My baby is dead,? she says. ?He killed my baby.?

Val feels the sting of threatened tears. She has never shared anything with her mother, and these words confirm suspicions she has always harboured. ?You knew,? she says, feeling only sadness now. Sometimes there is anger, hot and uncontrollable, bubbling out of her like an overflowing pot left unattended on the stove. Other times there is bitterness and pleasure to be taken from her mother’s fear. Now there is only emptiness, lingering hope torn from her, leaving her hollow.

On the night Val’s father was taken to the hospital, there was an old man sitting in the waiting room, holding a woman’s purse on his lap. Val watched the man sleep with his head dropped onto his chest, repulsed by the trail of saliva glistening on his chin.

Val’s father had been on dialysis for years and his kidneys had finally decided to quit. Not soon enough, as far as Val was concerned. The doctor told Val and Rhea that Bill had not suffered much and he was not suffering now that he was in a coma. Val had hoped there would be pain, and consciousness.

Bill’s bed was at the end of the hospital room, separated by a thin curtain from a woman who sometimes cried out in her sleep. The life support apparatus reminded Val of her father’s breathing, the sucking inhale and laborious exhale.

When Rhea left the room for coffee, Val pulled her chair close to her father’s bed and examined the face of the man who had destroyed her. Weak now, old and powerless. ?I forgive you,? she said, forcing the healing words. She waited for something to happen, a weight lifted off her shoulders. The breathing machine continued its work and Val felt nothing change.

On her wedding night, Rhea found herself remembering the pillow sham with the blue flowers and twisting vines. Bill held her close as she cried, seeming to understand the reason for her distance although she could not have explained it to him in words. She would never tell him about her father or the baby she had lost and she sensed that he would not resent her secrecy. On that night, she knew that she loved him and that he would be a good husband, a good father. It was what she had always wished for. 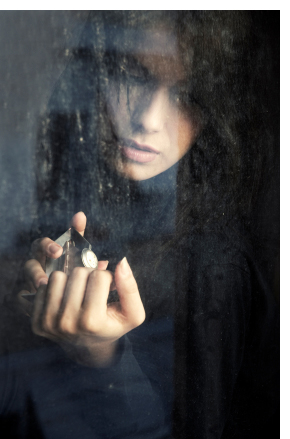 Val stirs custard on the stove while Rhea sits in the den watching another game of questions. She is making what Rhea used to call Banana Hide, custard filled with slices of banana that remain hidden under the skin.

When the custard is ready, Val pours some into a dessert bowl and lets it cool on the counter. As she washes the dinner dishes, she watches the skin form on the yellow custard and listens to a contestant tell the game show host that ?If wishes were horses? is her final answer.

The custard has cooled by the time Val finishes tidying the kitchen, and she takes the bowl with her into the den. Rhea is still sitting on a chair from the dining room, with a TV table pulled up close to her waist. ?Time for dessert,? Val says as she sets the bowl on the table and hands Rhea the spoon. It has not been a Pollock day, so Val does not have to feed her.

As Rhea spoons the custard into her mouth, slurping it like soup, Val feels a heat rising within her. It is that anger, bubbling, making the blood rush to her face. ?I can’t forgive you,? Val says and Rhea stops eating the custard, the hand holding her spoon poised midway between the bowl and her mouth. ?I can’t forgive you for not making him stop.?

Rhea looks at her daughter, her brow drawn down slightly. Val feels as if they are on the edge of something, a revelation, an admission. If on good days Rhea could remember the names of flowers, perhaps she could remember her daughter’s pain as well.

?He killed my baby,? Rhea says finally. She turns back to the television and brings the spoon to her mouth, slurping the cooled custard.

Val watches her mother eat and, when Rhea has finished her dessert, gets up to close the curtains against the gathering darkness. 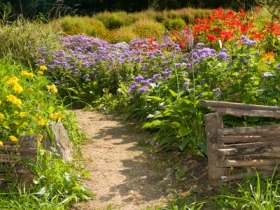