Columns
The Voice
From Where I Sit – What a Story!

Allow me to retell a story told to us this afternoon by a salesman named Allan.

A quick and dirty analysis reveals a story arc, tension, interesting characters, humour, climax, and resolution. But how much of a story’s appeal comes from the teller and the telling?

Impending death was the catalyst for the remembering and the retelling. Does some emotional thing kick in and take us back to the days of oral tradition, where stories were shared across a fire instead of through cyberspace? A time when people had more than 140 characters or emoticons to convey a message. When you sat across from someone and made eye contact. When the storyteller could see your eyes widen or your grin broaden.

Allan told us about his dying cousin. Family and friends are working frantically to finish the bodywork on a Chevy Nova for a final, no-holds-barred, winner-takes-all race to decide once and for all who’s got the hotter muscle car?Allan or his cousin. As heartwarming as that is though, it wasn’t the main story.

On a dark February night, when Allan should be walking the dog, he puts him in the car instead and begins cruising down back alleys in the seedier part of town, searching for a car to buy. In the dark, he catches a glimpse of a beat-up, dirty, snow-covered car that might be the coveted 1970 Chevelle SS he desires. He circles the block for another look. He does this two or three more times. He goes home, but can’t get the car out of his mind.

After his wife falls asleep, he heads out to look again, this time with a flashlight. He borrows a pen from the 7-11 to write down the VIN number. He leaves his card in the guy’s mailbox. Where did you go last night? the wife asks. Oh, no, you don’t, You’re not buying that car.

But he can’t get the car out of his mind. don’t even think of coming here without $8,000 in your hand, he’s told. He manages to lay his hands on $6,000. A buddy runs a background check on the machine, and it is everything the seller professed it to be.

Allan knows he won’t leave without the car.

He tries to play it cool, not let on how badly he wants it. The seller looks like Jesus, but with attitude. The house is cold and poorly lit, the fridge empty. Allan holds out a wad containing $5,000 in 20s. The seller swears, but takes the money and says he will buy some pot and his favourite hooker. Oh, and maybe get caught up on the mortgage. He then starts dragging stuff up from the basement?a set of tires and wheels (worth about $2,000), genuine GM parts, accessories, and more that he threw into the deal. 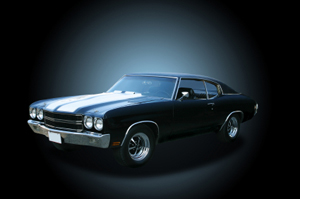 ?Oh, we were already having trouble. The divorce cost me about 30 grand. But That’s not all,? Allan said.

After he got the car completely redone, Allan wanted to go back and show the owner. He headed back to the neighbourhood, but nothing looked right. He wasn’t even sure he had the right street anymore. But a neighbour came out. Can I help you? he said. Yeah, I bought this car, fixed it up, wanted to show the previous owner.

But no luck. It seems that with all the new-found space in the basement and “seed money,” the seller had turned entrepreneurial, started a grow-op, and gotten busted, and was in jail.

You can’t make a story like this up, from where I sit.

In Conversation with Adam Moore

From Where I Sit – What a Story!