As a horror fan, I’ve bemoaned the recent spate of huge-scope, quasi-horror flicks that focus too intently on action and external forces. For me, the demarcation line between horror and sci-fi is clear: horror is intimate, often uncomfortably so, while sci-fi is broad and sometimes aloof. Most of the great horror masterpieces (there are many, but anything by Hitchcock, Carpenter’s The Thing, Clive Barker’s films, Jeepers Creepers, Cronenberg and Romero’s oeuvre, the first Saw film, and all but the Will Smith version of The Last Man on Earth novella come to mind) are emotional pressure cookers in which characters are tensely bundled in remote places or in literal or metaphorical cages. Monsters may abound?in Romero’s work, zombies literally subsume the seething human masses, leaving few survivors?but it is the intimately, sometimes excruciatingly so, examined reactions of a small group of people that drive the story.

Canadian director Vincenzo Natali, however, is an old school horror director, even if his films aren’t always categorized within the genre. It’s in his approach; Natali seems to have learned from the best, and to have created a unique style that is both referential of the past masters and refreshingly unique.

I became a fan of the director with his first feature, Cube. The micro-budget surreal horror film was one of the most unique, startling, and stylish films of the late 90s. In Cube, a small group of strangers awakens in a nightmarish configuration with only one apparent purpose: to grotesquely kill everyone who tries to escape. How the group coalesces, fractures, and grasps at and rejects each other is the core of the story.

Natali’s second release, Nothing, is considerably more surreal. The film is more black comedy than horror, but the isolation is more intense, with a focus on only two characters, who literally warp out of the known world to find that their home is the only place that exists. Again, characters startlingly awaken in a world removed from all human, social, and national context, where the only salvage is the moral and emotional (in)stability of their own minds. 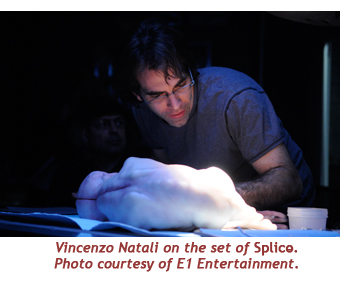 This week, I had the opportunity to preview the DVD release of Splice, Natali’s latest, and highest-budget, film. From the advertising, I was concerned it would be too similar to Species, a more conventional action-horror hybrid (pun intended) that worked, but which has already been imitated many times. Splice, however, is co-produced by Guillermo Del Toro, the Spanish director of some of the most brilliant, moving, and surreal horror films of the last 15 years. Fortunately, the input of these two individualistic directors overcame the pressures of the Hollywood machine, and produced a film that retains the intimacy and power of great horror, and, not incidentally, the best of independent Canadian filmmaking.

Splice has a slightly larger cast than Cube or Nothing, but all but the two main characters are peripheral. Isolated by a shared secret, Clive and Elsa?the rock stars of the genetic splicing biz?must come to terms with the responsibilities of having created a hybridized human on a scientific whim. Working outside of scientific ethics and the direction of their sponsors, the two have no moral resources to consult when they find they are unable to cope with the increasing demands of their growing experiment and the reality that what they have created is not quite, but almost, a human being.

I say almost because Dren, their creation, is as endearingly human as she is naively animal and malignly alien. Her greatest handicap, however, is that she ages to adulthood in a matter of days, gaining what appears to be full adult intelligence, with very little experiential or emotional learning to help her contextualize her world or her role in relation to other intelligent beings. For Elsa and Clive, she is too human to be destroyed, and too monstrous to be released, so their dilemma is how to be humane while protecting humanity and their own very human choices. 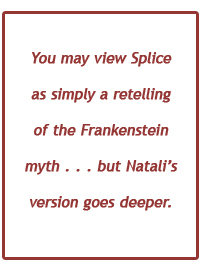 You may view Splice as simply a retelling of the Frankenstein myth?which it is?but Natali’s version goes deeper. Wisely, he’s sheared his Dr. Frankenstein into a pair of creators; one of each gender, co-workers, lovers, and business partners, startlingly similar, but always complementing each other emotionally and acting alternately as yin and yang.

Adrien Brody and Sarah Polley have great chemistry in this film, and are convincing as the talented but sheltered team of self-professed science nerds who hide deep insecurities behind a facade of pop culture iconicity (as the film opens, we learn that the pair is featured on the cover of Wired magazine). They are each other’s only moral compass, yet too similar and confused to be of much assistance when Dren becomes sometimes impossible to classify. Their inner turmoil is influenced as much by each other as by the culminating pressures of the outside world and the rapidly growing creature (child) in their lab. 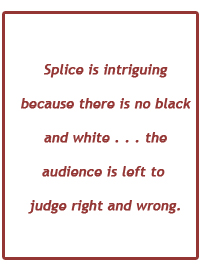 Splice is intriguing because there is no black and white. None of the characters are particularly evil or single-purposed, but all have moments of both humanity and scientific or business-like detachment. I liked that these are characters whose motivations I can understand and that the audience is left to judge right and wrong.

An interesting undercurrent in Splice is the legacy of child abuse, revealed through Elsa’s vacillation between tender nurturing and crushing, cold-hearted control of her progeny. The nature vs. nurture question follows: is Dren increasingly difficult to control because it is her nature, or is she reacting to the chaos emanating from her panicked, damaged parents?

What is most intriguing for me is that this is one of the few films that questions our illogical fondness for splicing our own genetic material. Collectively, we idealize the act of creating new humans, even if the world has plenty and there are many genetically unrelated children in need of homes. It’s something I’ve often considered and discussed with friends, but Natali takes the concept further by completely confounding the ?natural? human procreative process with the scientific one. 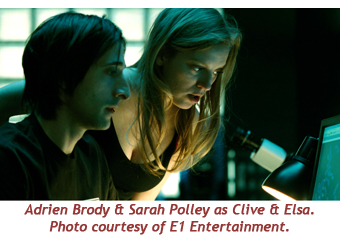 The discussion would not be complete, however, without giving due to the film’s jaw-dropping effects. But these effects are not obvious mind-blowers that take you out of the story and leave you agape. Splice uses technology in a very different way; its effects are so seamless, realistic, and judiciously used that It’s easy to believe that its improbable creature exists.

I found Splice to be a highly enjoyable film that left me thinking. For fans of Natali, it is a great extension of his work, incorporating a higher budget and spectacular effects without losing the human element for which he is known. I call Splice a horror film because of the boundaries that it crosses and the wrenching decisions that the scientists must make concerning their creation (albeit, in the end, a decision is made for them). That said, relative to most modern horror, It’s light on the violence and blood and suitable for most mature audiences. Be warned, though: Splice does ask you to confront some deep-seated feelings about procreation, children, abortion, and how to determine when something has a right to be called alive, or human.

No, it is not always an easy film to watch. Too often you aren’t sure what you feel, or should feel, and there is no tidy resolution. But it is a film to ponder, discuss, argue over, and watch again. 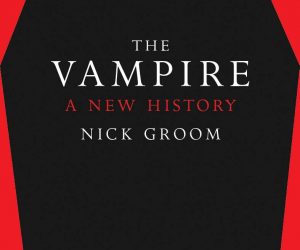