The Beast of the New World Order

?If you were the ruler of everyone,
At least from a fool’s point of view,
Given your gravities and your depravities,
What would you measure up to??

Doctor Sparkles, ?If You Were the Ruler of Everyone?

On a first listen to the beginning of this album, you immediately think, Egad, this is so cabaret! and then you remember: Doctor Sparkles IS cabaret.

Thus this CD recalls the best (and the worst) of all the musical cabaret you’ve ever heard, from radio and movie archives to the very smuggest political party gatherings.

Except you won’t find Doctor Sparkles in either. He does stay true to the genre (ingeniously, painfully), including self-conscious and contrived lyrics, a pompous tone, potty humor, and incorrect verbiage.

But is this a satire of the genre? Western musical genres have become so ridiculous lately that I confess I’ve often mistaken serious work for over-the-top lampoon. I don’t think it matters here, because Doctor Sparkles never takes himself seriously.

In his words, ?To the extent that I am centred and present to the God-in-my-innermost-being, I am by definition ?light-hearted? and haven’t the slightest use for gravity. In fact, I consider seriousness a form of suffering in that its subject eclipses the Love residing in the heart, and if Love could be described as my religion, then being serious about anything amounts to worshipping a false idol.?

His choice of cabaret as the soapbox for his rucksack full of subversive ideals and arch observations is a sign that, yes, we are living in a culture in flux, a culture in decline, a culture ripe for overturning. 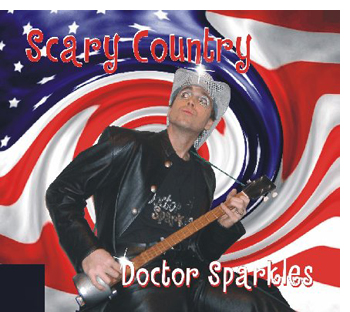 Doctor Sparkles, a.k.a. Kevin Patrick Baiko, came to my attention a couple of years back when I heard a track called ?Sail Away,? a droll yet poignant castigation of mindless living. In our 2008 interview, he recounted that he’d grown up in a house where a big band had kept up regular rehearsals and where his mother taught banjo and voice.

Here, once again, the music is lovely, of course?and the recording quality is superb, the arrangements are delightful, and Sparkles? voice is as smooth and rich as cream cheese. His masterful ukulele playing is adapted to multiple styles and shines in them all.

Yes, this is cabaret, and as such it incorporates (absorbs?) many other genres, offering an interesting cross-section of American folk music. High points include ?Playing Music to the End of Time,? a cheery zydeco number; ?Military Town Blues,? a burnin? hippie blues anthem; ?Without Freedom,? a Ventures-like rockabilly soundtrack; and ?Something Pretty,? a mockery of consumerist culture.

Doctor Sparkles is that annoying little brother who tries so hard to get everyone’s attention with his overly dramatic play-acting that it can take a while to realize that he really does have something to say That’s worth hearing. After all, It’s always the youngest child (or the youngest at heart) who knows what’s really going on.