Articles
The Voice
Maghreb Voices – Night in Tunisia: The Inevitable Eruption of a Long-standing Unrest

“Some friends had invited me to a small party at their house. My host told me a story that his gardener had told him a few days ago. I asked to speak to the gardener, who explained that he was from a village in the Northwest of Tunisia. It had snowed there; the people needed aid from the government and the authorities had promised to provide the aid. On the day that the aid was provided, the TV was there to record and preserve this historic moment. But according to my witness, people were just handed some old wool blankets and some food, and as soon as the TV journalists left, the authorities took the items back.

I can’t say if this is typical, but it is not the first time that I have heard stories like this.”

Leena Ben Mhenni, blogger and assistant professor of linguistics at the University of Tunis, in an interview with Wanda Waterman St. Louis

Sidi Bouzid is an enchanting coastal village on the shores of the Bay of Tunis. Like many villages in northwestern Tunisia (unlike the more affluent towns of the Northeast), the village is plagued by poverty due to high unemployment and a scarcity of resources.

The cluster of blue and white-painted houses is dominated by the magnificent home of Sakhr El Materi, the son-in-law of Tunisia’s president, Zine El-Abidine Ben Ali. The mansion, as well as the lifestyle of its inhabitants, has drawn the ire of many Tunisians for its conspicuous opulence in a country where basic needs are often unmet and youth unemployment is around 30 per cent.

It was in this village that in early December 2010, an unemployed 20-something university graduate named Mohamed Bouazizi was eking out a meagre living with a fruit and vegetable stand. The police, alleging that the stand was illegal, confiscated the produce (by some reports not once but three times). Being his family’s sole means of support yet unable to find work, the young man was overwhelmed with discouragement. He finally attempted suicide by dousing himself with gasoline and setting himself alight outside the police station, later dying from his burns.

News of the self-immolation and its motive spread quickly. Bouazizi became a martyr, his act the catalyst for a series of protests from various sectors of the population, including students, trade unionists, and lawyers, beginning on December 17. Something in the tragic desperation of Bouazizi’s plight had resonated with ordinary people and their advocates, symbolizing their own hopelessness, pent-up rage, and longing to be heard and taken seriously.

By January 3, the day when school students would return from their holidays, a national strike had been launched. More than eight Tunisian government websites had been sabotaged by hackers as an expression of solidarity with the protesters. 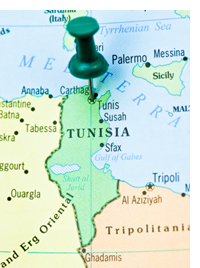 Claiming responsibility for the cyber attack is the international group Anonymous, which metes out punitive hacking measures against businesses and regimes seen to be antagonistic to WikiLeaks. Anonymous has made a special point of denouncing the Ben Ali administration’s silencing of free speech on the Internet.

By January 10, 20 protesters had allegedly died in violent confrontations at the hands of the police, and many police had been injured.
Tunisia is a country long seen as one of the more stable in the region; it has among the highest literacy rates in the Arab world and an excellent record of women’s rights, and is relatively affluent. But the country does not allow human rights groups to enter and monitor its activities, and has in the last decade imprisoned more journalists than any other Arab country. A current media blackout prevents journalists from interviewing Tunisians in many areas.

In an effort to help maintain stability, the United States continues to offer the country its financial and military support, and the EU is negotiating ?advanced partner status? for Tunisia.

(This three-part series will be continued next week.)