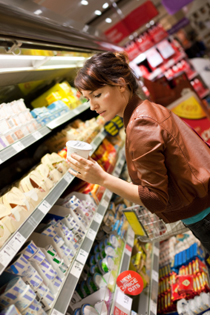 Childhood obesity: few will deny that It’s a serious problem facing North America today. But there’s significant disagreement over the cause of the trend, and even more debate over possible solutions. Last week, we looked at the movements targeting fast food manufacturers who use kid-friendly marketing. Although well-intentioned, these campaigns are missing the point: before we focus on the ability to choose between healthy and junk food, we need to make sure the choice actually exists.

Although education may be a key factor, it doesn’t tell the whole story. Even if we teach kids and parents how to make the right decisions, it doesn’t necessarily mean that they’ll be able to?and It’s not a matter of weak wills, either.

There’s a larger question of food economics at play here. Simply put, healthier food?food That’s more nutritionally dense?costs more. A lot more. And there’s plenty of research to back that up, including this study, which noted that not only is healthier food more expensive, but ?the price disparity between more and less nutritious foods appears to be growing.?

It seems counter-intuitive. After all, shouldn’t over-processed food be more costly? We always hear that in order to save cash at the checkout, we need to make our own food. But it doesn’t always work that simply, for both economic and social reasons.

We’ve seen it play out in the grocery aisles: frequently, the less nourishing, the cheaper. Whole wheat bread and pasta cost more. Brown rice isn’t readily available in bulk. Lean ground beef or turkey is a much pricier, although healthier, substitute for the higher-fat, higher-cholesterol ground beef That’s sold in the large packages. And on sale, sodium-laden canned vegetables are a far better buy than flash frozen veggies?let alone the fresh stuff.

Ironically, often It’s cheaper to buy than make your own. For example, high-sodium, high-sugar spaghetti sauce costs less than the 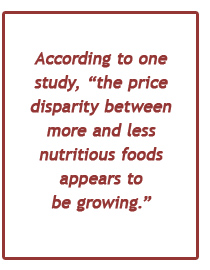 supplies you’d need to make your own homemade. And even among ?convenience? foods, healthier offerings are almost always higher priced (and usually only available in smaller quantities)?sometimes, It’s much more economical to eat off the McDonalds’s dollar menu.

Not only does skewed food pricing mean we’re drawn to cheaper, less healthy choices, but it also means that we’re drawn to a more limited circle of foods. Nutritionists often tout the advantages of a varied diet?one including an array of grains and legumes and multiple colour families of fruits and vegetables. But if you look on store shelves and displays, there are just a few staples?like wheat (frequently processed until much of the fibre and nutrition are gone), potatoes, and bananas?that seem to be available most cheaply. Seems like a pretty bland plate.

Even couponing can lead us to poorer health. Frequently I’ll get emails from money-saving blogs notifying me that a certain combination can lead to high-cholesterol frozen dinners or oversalted canned meals for less than a quarter apiece. And It’s tempting?nearly free meal, anyone? Meanwhile, even basic coupons for more whole foods are virtually nonexistent.

Mixing tight finances with the high cost of healthy food makes the problem even more serious. A few years back, The New York Times profiled one couple’s intriguing experiment: to spend a month living on a food budget of a dollar a day. Surprisingly, they discovered that it was very, very difficult to maintain a healthy and balanced diet. Unhealthy options, like preservative-, sugar-, and salt-laden peanut butter, were often standard fare, but ?fresh fruits and vegetables weren’t an option.? Nor was meat. 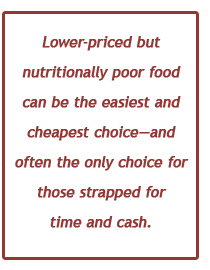 Nutritionally, their diet was lacking, and it showed. True, there was weight loss, but it was accompanied by an energy drop so significant that gym time was no longer an option.

Not that it would have been easy to find the time to head to the gym in the first place. In order to exist on a dollar a day, the couple had to prepare many meal items from scratch, including bread and tortillas. They readily acknowledged the difficulty, telling reporters that it was ?tough? to come home hungry after a 10-hour work day, and have make a meal from scratch.

And That’s another factor in the food cost dilemma. Working long hours (or several jobs) and dealing with financial stresses?on top of the lethargy That’s a result of poor nutrition?means little energy left for complicated cooking ventures. Plus, researchers have pointed out that many simply ?don’t know how to prepare foods from scratch, or lack the time.?

It’s a significant point. If You’re exhausted and your kid’s hungry, are you going to spend hours preparing a lentil stew and homemade bread, or are you going to raid the stash of boxed mac and cheese you bought on sale? Especially if the mac and cheese costs about the same as or less than the ingredients for the healthier meal?

It’s true that sometimes there are big sales during which healthier options can be stockpiled at prices similar to their nutritionally poorer counterparts. However, that requires an outlay of capital (and storage space), and for some, that flexibility just isn’t an option. After all, 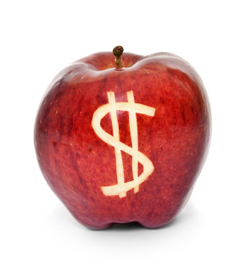 as one professor told this Ecologist reporter, food is a ?flexible item,? one that has to be seen in a larger context of fixed bills and priorities.

What’s the solution? According to grassroots group Food Democracy Now, we need to find a new model of food growing and distribution, one in which both the farmer and the consumer are the primary beneficiaries (rather than a series of corporations in the middle). Food Democracy Now advocates for a ?more sustainable food system.?

Reaching that goal might be complicated, but there are some positive developments. Surprisingly, mega-chain Wal-Mart is pioneering plans to promote a healthier lifestyle. And It’s going beyond the obligatory removing-additives and educational program tactics. Rather, it will attempt to reduce the so-called health food price premium and lower the prices on fresh fruits and vegetables through a series of initiatives that will remove ?unnecessary costs? in the distribution chain. The Wal-Mart CEO told reporters that families shouldn’t ?have to choose between food that is healthier for them and food they can afford.?

It’s quite possible that other food supply businesses will follow suit. And although the corporate agri-business model may be a large part of the problem, these are moves in the right direction. After all, widespread awareness of the food economics that drive society to unhealthier market choices is the first step toward a healthier future.