?The beauty of the world has two edges, one of laughter, one of anguish, cutting the heart asunder.?

If Charles Bukowski had taken guitar lessons from Duane Eddy and Jimi Hendrix and then channelled his sullen-joyous world view into recordings?well, he wouldn’t have sounded like this, but his sound might have appealed to the same people who like this music.

The album titles, and even the name of the act (which I assume is just one friendless genius in a cold basement), look like the Facebook entries of people who are learning English and trying to make it look like they’ve invented some hip new slang. And the recording quality is awful, but It’s so effective you’ve got to believe It’s intentional.

It’s so wrong It’s right, as Jim White would say. I mentioned this act in “Gregor’s Bed” and it grew on me so much that I had to recommend it here. Plus It’s free, so there’s no reason Henry’s aural miracles can’t reach the audience of misfits and miscreants it so obviously deserves.

Henry Chinaski was the love child of a hippie chick in a ?60s free love experiment here in Bear River, Nova Scotia. His mom never knew who his real dad was, but she had loved him very much and he had been part of the plan to change the world with just three chords and a self-righteous naïveté.

Henry grew up pantless, listening to protest songs and songs about freedom and songs about common folks who were nothing like his folks. There was nothing but yogourt and sprouts and bulgur wheat in the farmhouse, but one day young Henry opened the icebox and found?guess what? Baloney, just like this story, which was meant as a lame effort to describe the general tenor of this album.

The twangy guitars, the atmospheric desert sage slide guitar, the gospel tambourine, and a distant moaning male vocal are essential elements in this album. So is the post-apocalyptic, nihilist tone of the aural landscape. It’s an inebriating brew of real sounds: trains, planes, traffic, marching foot soldiers, hoots, hollers, screams, and war whoops.

The tracks have raunchy Beefheart-esque titles like ?Fuck You Thank You? and ?Kick my soul.? I got a laugh out of the musical sarcasm of ?Meditation (with candles)? while being simultaneously blown away by its eerie beauty.

Here come the space sounds with the ubiquitous twangy and Hawaiian guitars. Look for that famous Ronnie Hawkins riff (?Heyyyy, Bo Diddley!?) in ?I’ll never drink sangria with goldfish for the rest of my life, so bring me my royal cheese right now!?

The music of The Henry Chinaski’s Ashtray manifests five of The Mindful Bard’s criteria for music well worth a listen: 1) it is authentic, original, and delightful; 2) it gives me tools that help my art; 3) it inspires an awareness of the sanctity of creation; 4) it is about attainment of the true self; and 5) it provides respite from a sick and cruel world, a respite enabling me to renew myself for a return to mindful artistic endeavour. 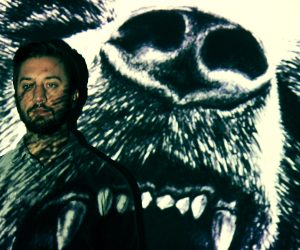 In Conversation – with Sierra Blanca