Articles
The Voice
In Conversation With . . . Stacey Kent, Part I

Stacey Kent is an American jazz chanteuse with a large and zealous worldwide cult following. Her meticulous, understated phrasings and deeply sensitive renderings of standards and original tunes have won her many accolades and enthusiastic reviews. She sings in both English and French.

Stacey began her musical career after completing a Masters degree in comparative literature. Now, after six bestselling albums last year (with many songs co-written by friend and acclaimed novelist Kazuo Ishiguro) she just released Raconte-moi and will soon release an album based on Brazilian music. Recently she took the time to talk with Wanda Waterman St. Louis about her early?and ongoing?search for musical treasures.

I don’t come from a ?musical family,? but music was a very important part of my upbringing. My most powerful memories are of being a little kid, getting off the bus after school, running up to my room, closing my door, and putting on my music. That was everything to me.

I had older siblings, so I was also listening to what they were listening to. I made discoveries through my friends and my friends? siblings. Everything I could find I would listen to, and this led me from one record to another. Even in places where you wouldn’t expect to find music, I would be listening. Even when I was out shopping with my mother, I would be in a shop and the music would be on and I would tune in to it. I suppose other people were just passing by without noticing the music was there.

My parents were very into classical music, so I discovered classical composers through them?Ravel and Debussy and Maria Callas and Prokofiev?and I loved it and it moved me. Even when I was little I knew that there were certain chord progressions that touched me, that made me cry. But I didn’t take it any further than that.

My brothers and sisters were quite a bit older than I was, so there was kind of a hippie movement in the house; I listened to Crosby, Stills, and Nash, and Neil Young. Then it was Aretha Franklin and Louis Armstrong and Ella Fitzgerald. There were lots of movies going on in the house too, so I was listening to Julie Andrews and Barbra Streisand.

One of my sister’s friends was listening to Django Reinhardt and I remember going to her house and hearing Django playing in her bedroom. I stopped at the door and said, ?What’s that?? She said, ?That’s Django,? and she made me a cassette tape to take home. I looked at the titles and the list of personnel, because she had written it all out for me, and I discovered other names through that. I discovered Benny Carter and went to the record store looking for him. 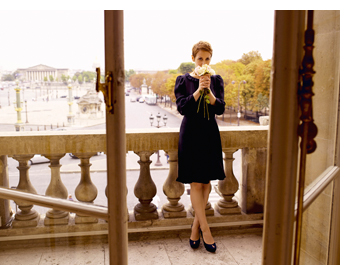 I don’t think it was a quest to find anything specific? it was just a quest to make discoveries.

I bought a record called Ella & Duke at the Cote d?Azur, and I loved the cover?it was black and white and grainy?and the music was live and very real. I took this record home and listened to it a gazillion times, without knowing what jazz was. I didn’t know what the categories were, and I didn’t care at that point. It was all just very eclectic and pretty wonderful.

My parents knew that I was musical and they encouraged it, but there were no musicians in our family. It was never discussed that I would or wanted to be a musician, but whenever there was a gathering I was the one who was asked to sing and perform for it.

I went to college and got a degree in comparative literature, which was something that was very important to me, and I think it helped fuel what I do today. But it was always a hobby, it was always on the sidelines, and it wasn’t until after college that I realized that I could actually pursue this thing.