Articles
The Voice
In Conversation With . . . Stacey Kent, Part II

Stacey Kent is a jazz chanteuse with a large and zealous worldwide cult following. Her understated phrasing and deeply sensitive renderings of standards and original tunes in several languages have won her many accolades and enthusiastic reviews.

Stacey began her musical career after completing a Master’s degree in comparative literature. In 2010, after six best-selling albums, she released Raconte-moi. Recently she took the time to talk with Wanda Waterman St. Louis about reading, The Great American Songbook, and collaborating with acclaimed novelist Kazuo Ishiguro. (Read the first part of this interview here.)

I remember being a kid and really hearing a João Gilberto and Stan Getz album for the first time. It was another one of those ?What is that?? moments.

Another great moment was the first time we performed in Taipei. Our records had preceded us?they knew who we were before we knew who they were. The concert hall was one of the most magnificent I’d seen in my life. It had been sold out and they had been waiting for so long to hear us; when we walked out on the stage the welcome was so overwhelming it was hard to contain ourselves.

Wherever we play, people relate to the universal stories. I think about this constantly; there’s so much divide in the world (?we’re like this, You’re like that?). As a musician all those boundaries fall away. People are the same wherever you go, and That’s the single most heartening thing out there. 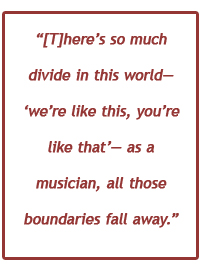 A very important part of my childhood was reading. There were no musicians in my house growing up, but there were a lot of readers and a lot of storytelling. My grandmother was an English teacher and my mother was a literature teacher for a while, and for them reading, especially reading aloud, was very important. We used to read aloud to each other in the evenings. It taught me to recognize how singular each voice is. The way in which I interpreted a chapter was different from anybody else’s interpretation. I found my voice very early on.

A frequent topic in jazz is making something your own That’s been done many times by many other people. I wanted our musical arrangements to be simple and pure and I wanted the song to be at the forefront?I wanted the words to be heard. Just seeing the words, with my sensibility, there was never any question about what I should do to a song to make it my own. On the night that I sing ?Polka Dots and Moonbeams? it becomes my story and it belongs to my audience. I don’t think we need to do anything newfangled to a song to make it anything other.

There are people who want to be more playful (like changing the time signature), and if that comes naturally to them then they should?you have to pursue something the way you pursue it. But for me, I always wanted to be a part of the lyric and the story, and I think that comes from early in my life and all the reading we did as a family.

The American Songbook is so appealing. It’s not the only songbook that I like to draw from?there’s French music out there and certainly Brazilian music?but there’s something about that particular period in history where the message had to be so subversive because it was a repressed period and things needed to be covered up. they’re so rich and full of metaphor and poetry.

Ishiguro was on Desert Island Disks, a show on BBC Radio?a wonderful show because they bring in all these celebrities from different walks of life?and one of the interview questions is ?If you could only listen to seven records for the rest of your life, which records would you choose?? You learn so much about people when you find out what music they listen to!

Ishiguro was on, and of the seven records that he took to his desert island, mine was one of them. I’d had no idea that he was a fan of mine, and I had for so long been a fan of his. I had read [The] Remains of the Day and The Unconsoled and When We Were Orphans, and I was just a huge fan.

My recordings have been chosen by other guests on that show, but It’s one thing to be chosen and another thing entirely to be chosen by one of your heroes. So I wrote to him and he wrote me back and we started a correspondence and we became friends.

Occasionally we would get together and have lunch. It was my husband Jim who, on one of these occasions, said, ?Ish, we should write a song for Stacey.?

And Ishiguro said, ?Yes, we should do this.?

Ish and I both came to England from other countries and had developed the sense of being displaced persons. By losing your groundedness and taking on a floating identity, you suddenly see your world and the new world very differently and you become a person of the whole world. It’s sad to lose your roots in a way, but what you gain in return is so valuable because you get to see the world in a particular way almost because of the insecurity of losing the ground beneath you.