?Every act of rebellion expresses a nostalgia for innocence and an appeal to the essence of being.?

A communiqué sent out by group Action pour le Changement en Algerie urged a peaceful and unified, but fearlessly uncompromising, demonstration for Saturday, Feb 12. But efforts were made to derail these protests by taking advantage of the regional, political, ethnic, and religious disparities among Algerians. Some media outlets even tried to discredit the protests by framing them not as manifestations of popular dissent, but rather as rebellions contrived by the opposition party.

In this winter of Middle Eastern discontent, one young Algerian described the post-colonial corruption and brutality afflicting his country as gangrenous limbs long overdue for amputation. However, some argue that true revolution is impossible in Algeria because the civil war that ended in 1962?and the horrors that came in its wake? in a sense immunized the people against further revolt.

Many Algerians say that the violence of the 1990s (sometimes referred to as the Ten Black Years) damaged them, their families, and their communities, leaving a legacy of despair, trauma, paranoia, and paralysis. One man says he was six years old when the troubles started; he clearly remembers watching the fear daily growing in his parents? eyes and dreading the mornings, when the wounded, the dead, and the dying could be found lying in the streets around his home.

Some actually dreamed of creating enterprises that would help their people, but this remained a dream only, continuously thwarted by a regime wilfully blind to the lot of ordinary citizens. For years many Algerians felt that the only way to have any kind of future was simply to leave the country.

This led to waves of illegal migration by means that were dangerous, if not life-threatening, and which didn’t always lead to a big rock candy mountain. Many of these young people disappeared, never to be seen or heard from again.

Even now It’s a risk that seems to many to be worth taking. It’s hard for educated youth to accept the grinding poverty around them when they’re well aware of Algeria’s wealth. For the unemployed with no possibility of marriage or home ownership in the foreseeable future, watching this wealth flow to the elites and outside the country is disheartening and infuriating. 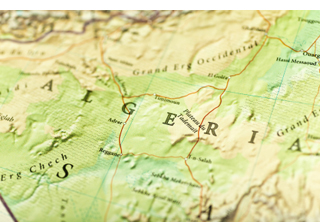 Leaders are now in a race to develop economic, legislative, and electoral reforms in order to prevent the revolutions that probably can’t be stopped but might possibly?if leaders stop their wanton use of violence?be transmuted into a positive and lasting transformation. Not very glamorous, but far less risky than revolution.

But few young people seem excited by the prospect of remaining in Algeria, even if the government does change for the better. One might hazard a guess that Algerians have been so traumatized by the historical events within their borders that many have passed the point of no return and just went to get out.

It’s unfortunate, because most see Algeria’s greatest resource as the Algerians themselves, They take great pride in being descended from the people who ousted the French colonial presence in 1962. Algerians describe one other as strong, spiritual, brave, and kind, and people from other Middle Eastern countries are usually in hearty accord. ?Even if you don’t have a job, you will not starve,? says one Algerian. ?The people love each other.?