The literary world has many divides, and backers of a given side can be ferocious in defending their views. E-books versus paper. Science fiction and horror versus literary journals. Usually I’m content to wander somewhere in the middle of the battlefield, seeing the pros and cons of both sides. But when it comes to marginalia?those scribbles and underlines readers add to books?there’s only one thing I can say: keep your hands off my margins.

In a recent New York Times article, the writer noted that legions of book lovers are lamenting the passing of this habit (let’s set the digital equivalent aside for a moment). Indeed, some books increase astronomically in value simply because someone doodled in their margins. It helps when that someone is a famous author like Mark Twain or Edgar Allan Poe, but for many marginalia lovers the scribbler’s identity doesn’t matter. It is, as oral historian Studs Terkel noted, part of the ?raucous conversation? that reading should be, creating a dynamic exchange of opinions about a work.

To an extent, I agree. Reading has never been a passive experience. A writer’s voice speaks to us through fiction and we respond, visualizing the stories they tell, reacting emotionally. Textbooks and other non-fiction books do the same. We absorb new information, and perhaps begin to think in new ways. Whether digital or on paper, the words are a dialogue between reader and writer. And marginalia is the equivalent of someone else butting, uninvited, into that conversation.

That’s not to suggest that a conversation can’t be enriched by other points of view. Far from it. But the difference is much like that between chatting at a party and relaxing in a quiet corner with a friend. At a public gathering or in comment threads, It’s expected that people join in. Random comments, dissenting opinions?It’s all part of the exchange.

But if I’ve chosen to engage with the ideas of a specific person?either face-to-face or on a page?someone else’s scribbled margin notes interrupt that conversation. It’s as though they’ve sidled up, plopped themselves on my lap, and said, ?Yes, but here’s what I think . . .? Then they disappear, only to add another unsolicited disruption a few pages further on. 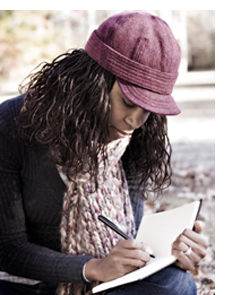 Perhaps their comments add value to the conversation, but you could apply that what-if logic to every stranger browsing the same shelves in the bookstore. If someone’s interested in the same title or genre, I don’t necessarily want him blurting random opinions at me as I’m flipping the pages. And if It’s a textbook, an anonymous student’s erroneous (but well-meaning) margin notes could easily lead me astray.

Most of us don’t welcome those interruptions in private conversation, which is why it baffles me that so many hold marginalia so dear. I don’t argue the historical value in preserving the margin jottings of Thomas Jefferson or Samuel Taylor Coleridge. And the marginal musings of ordinary citizens create a social record That’s often painfully missing in history books, mostly because poor or uneducated people had no way to preserve their experience.

Still, marginalia strikes me as someone tugging at my sleeve to interrupt a private conversation. Perhaps the comment function of e-books will change my mind, allowing me to engage once I’ve had a chance to absorb the original dialogue.

But for now, I’d rather listen to Jane Austen in private.

The Mindful Bard – Confessions: An Innocent Life in Communist China