Articles
The Voice
In Conversation With . . . Gabi Epstein

Gabi Epstein is a Torontonian singer and actress who’s been singing professionally since the age of six. A vocal major at the Claude Watson School of the Performing Arts, she later completed her Bachelor of Music at McGill in just two years. Many professional stage roles followed, including parts in Bye Bye Birdie and Napoleon (Talk is Free Theatre), the U.S. National Tour of Stellaluna (King Cole Theatricals), and West Side Story Suite (National Ballet of Canada). A few months ago she released her debut album, Show Off. Gabi recently took the time to answer Wanda Waterman St. Louis’s questions about her influences and achievements.

I’m one of those lucky individuals who had a really fantastic childhood. I come from a very musical family and so I grew up going to concerts and shows. Apparently the first show I ever saw was Peter Pan, and at intermission I cried because I thought the show was over. My brother and I both went to performing arts elementary and high schools and really thrived there. That was when I knew I wanted to go into performing.

When I was 10 I auditioned for the Toronto children’s Chorus?a world-renowned choir that not only taught us choral music but also theory and sight-singing. I sang with them for six years, and That’s where my real musical training started. I learned how to read music at a very early age and it also helped that I was taking piano lessons at the time. And I was majoring in music at my performing arts high school. I was doing drama as well, but it was this love I had for the study of music that made me want to study music in university.

Why Jazz? And Why Cabaret?

Although I studied classical music at McGill, I was always the ?classical girl who wasn’t going to go into opera.? I did a lot of drama in high school and was the lead in many of the school shows. And so when I got to Montreal?a city so rich in jazz?I obviously immersed myself in this aspect of music as well. I joined the jazz choir as well as an a capella group. I took a jazz history and a jazz theory course.

When I moved back to Toronto, hoping to begin my musical theatre career, I had to do some little concerts on my own to get some buzz going. Because my shows are so theatrical, they fit perfectly into the style of ?cabaret.? However, that word is not [widely] known outside of the performing community and so referring to myself as a ?music theatre performer who sings jazz but is not necessarily a jazz singer? seemed to fit perfectly.

Working with John was one of the most inspiring experiences of my life. He was my director, my collaborator, and my mentor. Even with all of the experience he has he always included me in the creative process. I ended up trusting his instincts (they were almost always right!). I would work with him again in a heartbeat.

When I was in development stages with John on the CD, we wanted to immerse ourselves in lots of different styles of music and to listen to a lot of different singers?especially albums that they recorded early in their careers. The most inspiring one and an album that we ended up using as inspiration for my own CD was the very first album that Barbra Streisand had ever come out with, called The Barbra Streisand Album. I will never forget listening to that for the first time. I had always been a Barbra fan, but this truly changed the way I approached cabaret. I couldn’t believe how many layers there were to her voice at such a young age. 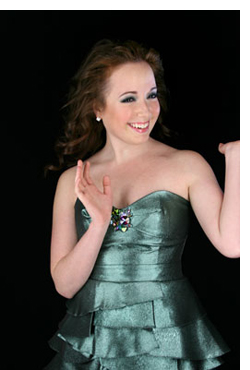 When I was 21, I had the amazing opportunity to be in the final callbacks for the role of Ariel in The Little Mermaid on Broadway. I was flown down for the day and spent all day there singing for multiple people. At the end of the day, they said that the ?Disney team? was there. They didn’t tell me that the Disney team included Alan Menken. I got to sing ?Part of Your World? for him and he gave me some wonderful compliments after my audition. I didn’t end up getting the role but I will never forget that moment.

The Power of Positive People

Usually if I’m surrounded by positive people I feel more positive myself and end up channelling that energy into what I do. I’m not one of those artists that [need] to go through heartbreak in order to be creative. If my life is good and I’m doing what I love I use that energy to come up with new projects with my creative and talented peers.

I just starred in the world premiere of a brand new musical by American writers Kooman and Dimond called Dani Girl. Next up I’m doing a show with the Harold Green Jewish Theatre called To Life, which pays tribute to Jewish vaudeville and also to the Jewish life.

I’m also remounting a production of a show I did a few years ago called Make ?em Laugh, which is a one-woman musical about the life of Fanny Brice.