?Love does not consist in gazing at each other, but in looking outward together in the same direction.?

Soundtrack to the Horizontal Dance of Two Souls in Harmony

In our recent interview, Stacey Kent spoke lovingly of the Russian Francophile grandfather with whom she had conversed in French from her early years. Granddad also taught her many French poems and nurtured her natural curiosity about other cultures. In ushering her into the world of another language he opened Stacey’s eyes to the possibilities of the kind of international existence she now revels in.

At first Stacey thought that an album of French songs might be slightly self-indulgent, and that only francophones would appreciate such a thing. She was amazed when Raconte-moi became a big seller in more than 36 countries.

Then she considered how much she enjoyed listening to songs sung in languages she didn’t know. Somehow, not knowing the words granted the music a mysterious resonance. ?Two things that are both true,? she says. ?The words are so important, and yet when you don’t understand the words, the song is still powerful.?

The album is a sea of Latin rhythms gently lapping Stacey’s rich, authentic singing voice. The band provides a minimal but spacious, full-bodied virtuoso accompaniment. The antithesis of the roaring banshees recently emerging from the star-making machinery, Stacey’s voice is surprising in its originality even as she claims she doesn’t try to do anything too new in her interpretations of a song. (She does do this delightful little purr at the end of some of her lines, and a carefully meted out vibrato is meticulously applied at just the right moment.)

Much of Stacey’s musical interpretation skill can be attributed to her literary education and to her childhood growing up in a family whose members read aloud to each other, which helped her to learn to treasure the uniqueness of her own voice. 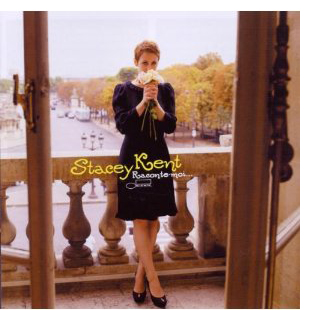 The choice of songs is faultless. Each lyric manifests a pristine purity and at the same time a richness of detail similar to that found in the best imagist poems, while never being pedantic or heavy. My favourite on the album, for example, ?Les Eaux De Mars,? is a surreal rhapsody on a jarringly real dreamscape.

Stacey and Jim Tomlinson, her husband, have an amazingly fecund creative relationship. I like to think of them as the Jean-Paul Sartre and Simone de Beauvoir of jazz (a comparison I’m sure Simone and Jean-Paul would have found supremely flattering). It’s not just that his sax is the perfectly masculine counterpart to Stacey’s thoughtful and soulful femininity; they share an aesthetic that is playful, adventurous, and profoundly informed.

This is an album of love songs that doesn’t portray a romance of mind games, tensions, and power struggles, but rather a celebration of the harmony between two thoughtful and like-minded souls. Its tracks breathe out a subtle, tender sensuality that rustles the musical veil, exhibiting an artistic restraint that enhances the listening experience. It’s a perfumed sea breeze after years of smog.

Raconte-moi manifests five of The Mindful Bard’s criteria for music well worth a listen: 1) it is authentic, original, and delightful; 2) it makes me want to be a better artist; 3) it gives me tools that help me be a better artist; 4) it inspires an awareness of the sanctity of creation; and 5) it provides respite from a sick and cruel world, a respite enabling me to renew myself for a return to mindful artistic endeavour.