Columns
The Voice
The Mindful Bard – Waiting for Superman

“A child which appears reasonably happy may actually be suffering horrors which it cannot or will not reveal. It lives in a sort of alien under-water world which we can only penetrate by memory or divination.”

George Orwell, “Such, Such Were the Joys”

No Teacher Left Behind 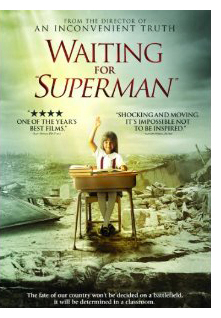 At the beginning of this deeply engaging story about a very prosaic subject, education reformer Geoffrey Canada describes how he felt as a child upon discovering that Superman did not exist. The weight of this knowledge became crushing when he realized that no one was coming to save the people in his community from lives of poverty, frustration, and hopelessness.

The film takes us from American public education as a democratic ideal to American public education as a system in decline. It also brings us from the idealistic beginnings of teachers’ unions to the present day, where the union leaders often defend the right of some teachers to be lazy, irresponsible, and even criminal in the exercise of their duties.

Waiting for Superman follows families from several social strata as they journey toward a better educational experience. They are willing to go to any length to see that their children at least have the chance to succeed in a country that simply does not provide most children with a good education (despite inflated school budgets that give only half the results they attained decades ago). 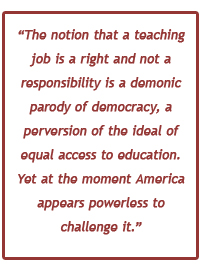 A central problem is underperforming teachers and the utter inability of anyone to sway the teachers’ unions’ stance that every teacher is created equal, that a Mr. Garrison is as entitled to tenure (which is nearly impossible to take away) as a Mr. Chips. Contracts originally designed to protect teachers from arbitrary dismissal slowly morphed into fortresses for the incompetent.

This is pretty atrocious. The union member ideally seeks solidarity not only to achieve basic safety standards and a fair return on work, but also to be given the power to protect and advocate for those they serve. Thus nurses will strike to protect their jobs in the event that they have blow the whistle on incompetent or abusive doctors, and accountants can be protected in the event that they must testify to a boss’s shady business dealings. The notion that a teaching job is a right and not a responsibility is a demonic parody of democracy, a perversion of the ideal of equal access to education. Yet at the moment America appears powerless to challenge it.

But it’s not like everyone is sitting on their hands. Charter schools–institutions run on public money but independent of local school boards–are an important new development. These schools are free to improve teaching methods, to continue employing only teachers who teach, and to dispense with tracking systems that arbitrarily hand many students the dirty end of the educational stick. 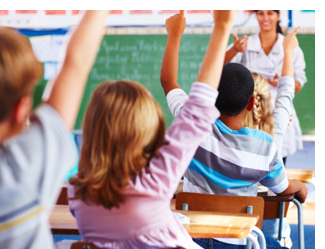 But only one in five of these charter schools is producing good results, and competition is fierce; families sit and wait for a lottery to decide whether or not their children will have a future.

This film gives a powerful and poetic salute to the love of some parents and the drive and giftedness of some children, up against a system which, in the words of Washington, DC school superintendent Michelle Rhee, is “all about the adults.” These are families watching their futures decided by lottery. You can practically hear the hearts breaking.

Waiting for Superman manifests four of The Mindful Bard’s criteria for films well worth seeing: 1) it poses and admirably responds to questions having a direct bearing on my view of existence; 2) it stimulates my mind; 3) it displays an engagement with and compassionate response to suffering; and 4) it renews my enthusiasm for positive social action. 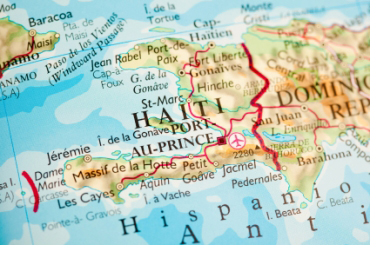 The Mindful Bard – An Inconvenient Truth