In 1848, James Wilson Marshall found some gold flakes in the American River at the base of the Sierra Nevada Mountains in California. His discovery sparked something more astonishing than the gold itself: the idea that anyone, regardless of class, education, or capital, could become a self-made success?maybe even overnight.
Today, there’s a similar fever sweeping the hills of self-publishing. Just like the heady days of Sutter’s Mill, plenty of fortune seekers will come away empty-handed. But those long-ago prospectors hold some valuable lessons for writers determined to make it in today’s literary gold rush.

Between 1848 and 1849, the non-native population of California soared from eight hundred to some 100,000. That’s an increase of more than a thousand per cent. The rise in self-published titles isn’t that high, but the growth is still staggering: a 181 per cent increase between 2008 and 2009. As The New York Times reported, Bowker bibliographic company listed 764,448 titles produced by self-publishers and microniche publishers in 2009. (To give some perspective, traditional publishers produced 288,355 titles the same year.)

Whether they decide on e-books, print on demand, or full-on self-publishing (in which the author sources everything from editors to cover stock), some writers are simply in it for the adventure. They’ve joined the fray not necessarily because they expect to stumble upon an enormous gold nugget lying in a stream, but simply for the thrill of seeing their name next to the word ?author,? be it digital or on paper.

But that thrill soon wears off and a new realization sets in. Writing is a job. It’s work. Not as hard as panning in bone-chilling water all day, but it can be as much of a nine-to-five slog as most other jobs. To finish a book or collection of short stories is exciting. You’ve proven you can do it. To keep producing a steady stream of decent words is another ball game entirely. Anyone who’s ever decided to put a daily blog together can attest to that. Not even selling your book to a real live New York publisher can turn out to be all that glamorous. 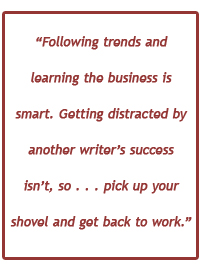 For those writers, the best advice is not to spend next year’s seed money (or savings) on a short-lived thrill. Plenty of vanity presses will happily take thousands from you. Sure, you’ll have a stack of books in your spare room. And a Big Six publisher might actually swoop down and offer you a million dollar advance. In the early days of the California gold rush, people really were digging gold out of riverbeds with spoons.

But those days quickly ended as more and more miners swarmed the landscape. Bestsellers or mining bonanzas, there are only so many genuine motherlodes to go around, so don’t bet the farm.

Even for writers who are old hands at mining words, there’s still an element of luck. No, I’m not saying success is a total crapshoot. Publishers and agents have talked long and hard about the importance of professionalism, skill, and a polished manuscript, and they’re right. Yet just like a query letter can simply land on the wrong agent’s desk on the wrong day (and be rejected even if the book is brilliant), self-publishing carries an element of chance. 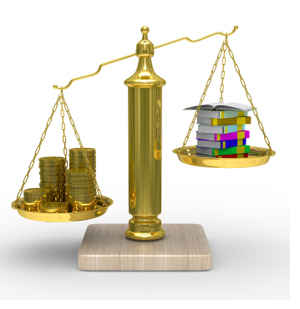 Suppose you’ve written the best vampire teen romance in the history of the world. You’ve buffed and polished it until It’s shinier than a gold tooth. You just know they’ll make a Hollywood blockbuster out of it and, author ego aside, it really is that good. But the week before you self-publish, a major blog declares that vampire stories are dead. The market’s moved on and the next big thing is cozy British mysteries. Readers and reviewers get busy discovering emerging new mystery authors, and your blood-sucking masterpiece is left to wither like a vampire at high noon.

If you think That’s discouraging, try being a miner toiling next to the claim that held the largest gold nugget ever found, one that weighed 195 pounds. Self-publishing isn’t immune to the element of chance either, but if You’re going to make it you need to be prepared to focus on your claim, not that of the writer next to you. If your vampire novel was really that good, It’s probably because you spent a lot of time and effort honing your craft.

Following trends and learning the business is smart. Getting distracted by another writer’s success isn’t, so give yourself a limited amount of time to stare in awe. Then pick up your shovel and get back to work.

In the end, the one thing that self-publishing and the gold rush have in common is opportunity. Not everyone has the same connections or resources (many established authors have a fan base already waiting), but the playing field is perhaps more level than ever before. And just like the gold rush, that may or may not last. 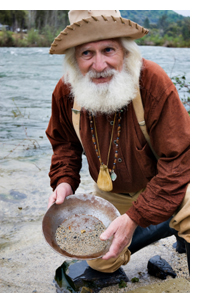 When Americans from the east coast rushed across the Sierra Nevada Mountains in 1849, many foreign miners were shoved off established claims, either through extreme taxation, discriminatory laws, or outright violence. Later, big corporations moved in and extracted the gold the smaller miners didn’t have the equipment to reach. As the new self-publishing landscape matures some lines are bound to be erected, however permeable. Perhaps a communal recommendation system will evolve. That might mean authors signing up at review sites, or it may take another form. No one knows for sure.

For now, though, famous names and unknowns are free to stake their claims next to each other on the same virtual shelves. Whether you measure success by the amount of money you earn or by the devotion of a small number of loyal readers, It’s important to keep in mind that the prospectors who did strike it rich were often the ones who kept on digging.

The Fly on the Wall—Celebrating Silence as Pure Study Gold 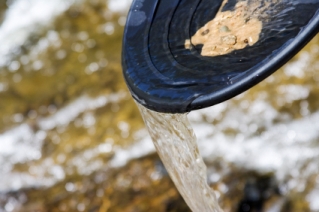