Are you a daydreamer? Does your mind constantly wander? Do you think up your best ideas while taking a shower or going for a run? You’re not crazy?and You’re not alone.

According to psychologists, certain settings are more conducive to creativity and invention?and It’s not necessarily a quiet office with all the modern technological paraphernalia, or even a place where distractions are nil.

Scientists suggest that activities that don’t require much ?concentration on any aspect of the task at hand? lend themselves easily to inspiration. This means that if You’re stuck on part two of an essay, it might be a good idea to take a break from it and do something simple to allow your mind to wander. Odds are good that the idea will eventually come to you if you let it.

Sound counterintuitive? It’s difficult to justify purposeful daydreaming. After all, we’re trained from early childhood that forward-focused is the only route to productivity. Isn’t daydreaming the proverbial side path that leads to nowhere?

Perhaps not. We’ve all heard the adage about genius being only one per cent inspiration. But you still need that one per cent, and one of the best ways to delve into our hidden genius is to give ourselves the chance for positive distraction.

For example, It’s believed that Albert Einstein conceived the theory of relativity while daydreaming?around the same time that he was expelled from school. And other Nobel Prize winners, inventors, and thinkers throughout history have found inspiration by allowing their brains to wander.

Physiologically, It’s a function of our constantly-active brains. we’re more than mere fight-or-flight; scientists are now realizing that ?the brain is a pro-active system that is continually at work helping us solve problems and prepare for future demands.?

In other words, while we’re proudly multi-tasking, our brains are so busy planning our next several moves that there’s little room for the associative thought that leads to creative genius and inventive ideas. 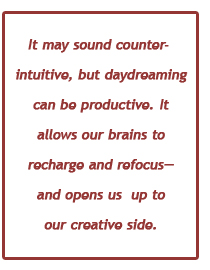 But when our brains are allowed to freely wander, with little else holding their attention, ?one idea can trigger the next across a relatively unconstrained range of concepts and associations that might otherwise be viewed as completely unrelated.?

The solution might be to start looking at our brains as another body part, one that needs daily care. we’re urged to avoid eye strain when reading or working at the computer, so we adjust our monitors, ensure proper lighting, and look away from the screen (or page) periodically. We make an effort to give our eyes a break and a chance to refocus.

Maybe It’s an equally good idea to give our brains a rest. There’s plenty of advice out there about scheduling in time to pursue our hobbies and personal interests. But although these are important for recharging our enthusiasm and zest for life, they may not be sufficient.

We need to allow our minds to relax by letting them engage, guilt-free, in positive daydreaming.

Unfortunately, this is a little difficult in practice. Unlike eyesight exercises, daydreaming isn’t something we can necessarily schedule. According to scientists, our most productive daydreaming?when we’re most likely to solve problems or, say, come up with the theory of relativity?happens when we’re ?unaware that we have drifted off.?

However, we can condition ourselves to daydream productively. The Second Act, a productivity blog, offers some good suggestions for getting into the relaxed state necessary to get our minds out of overdrive. The author recommends that we start by directing the focus of our daydreams?which gets us out of the habit of unproductive daydreaming (for example, obsessing over the rudeness of the other drivers this morning).

Performing some physical activity, particularly one that doesn’t require a lot of step-by-step brain action, is also conducive to problem-solving thought. Going for a run and taking a brisk walk are physically focused, and, although the brain is engaged, It’s not so overtasked that it can’t stray into the type of daydreaming that taps into our creative side.

Most of us struggle with procrastination, but the temptation to procrastinate may be linked to our brain’s desperate desire to take a rest from all the input we throw at it. And regardless of whether we discover some great theory of physics or dream up a brilliant invention, we’re doing our body and mind a favour by allowing ourselves the chance to positively daydream.

In fact, giving our brains a break may not only refresh and rejuvenate us, it may also open us up to new sources of inspiration and different ways of looking at the world?or at that assignment. 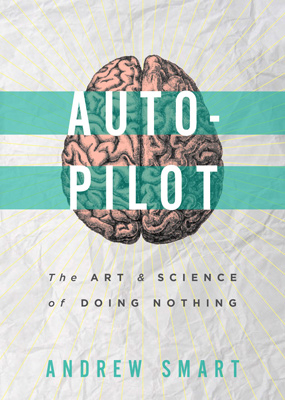 Travelling Book Review: The Art of Nothing 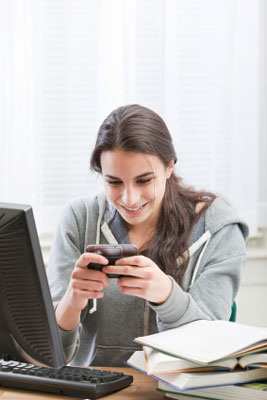