It’s tough being a celebrity. Not the money-fame-glamour part, but the part where people decide to write tell-all books that reveal things you’d rather not share with the world. Most celebrities have enough money to stop those books cold on the presses, but what if someone decided to write a revealing book about you? Even worse, what if that person was your parent and she went into overshare mode when you weren’t old enough to protest?or to understand how profoundly it could affect the rest of your life?

A recent case is Amy Chua’s Battle Hymn of the Tiger Mother. If you haven’t seen any of the debate swirling around it, the book concerns Chua’s extreme parenting style: no play dates, no school plays, nothing less than absolute academic and musical perfection. To mould such high-achieving youngsters, Chua used techniques like threatening to burn one daughter’s stuffed animals and throwing her children’s handmade birthday cards back at them because the quality wasn’t high enough. She’s even admitted to telling her bright, accomplished daughters that they’re ?garbage.?

No one’s criticizing Chua’s skills as an author. She’s the John M. Duff, Jr. Professor of Law at Yale Law School, and her first book, World on Fire, was a New York Times bestseller and an Economist magazine Best Book of the Year. And It’s not about whether you agree with her parenting style. The question is, does she have the right to sell details of her children’s private lives to the world?

According to the Citizen Media Law Project, a research centre hosted by Harvard University’s Berkman Center for Internet & Society, ?the legal claim known as ?publication of private facts? is a species of invasion of privacy.? In order to qualify as invasion of privacy, private facts that are published must be ?offensive to a reasonable person? as well as ?not legitimately newsworthy.? I don’t know about you, but I’d be offended if my personal life (good, bad, or indifferent) were sold to the public without my permission.

For some reason, putting kids on reality TV shows seems to draw more debate on the matter. When it comes 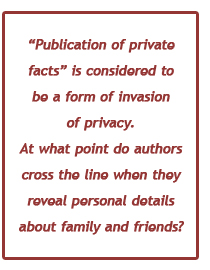 to shows like Jon & Kate Plus 8 or Raising Sextuplets, there’s plenty of criticism about whether the children’s daily lives are appropriate for public consumption. Perhaps It’s because the kids must cope with the intrusion of cameras and crews following them around?a situation that can be stressful even for adults who agree to be filmed.

But how will Chua’s disclosures affect her daughters at school, or even when they begin their careers? The microscope of public curiosity might fade for Chua, but her children will forever be known as the highly regimented offspring of the Tiger Mother?a stigma that could well affect them in job interviews or even in dating. The fallout could also influence the way their own children’s teachers interact with them.

Clearly, Chua has given her children everything she thinks they need: discipline, education, social advantages. But I can’t help thinking She’s denied them something even more important. And That’s the dignity of respecting their right to privacy.