The Movie about America That America Just didn’t Get

Craig is a suicidal teenager. He is crushed under absurdly unrealistic societal and familial expectations, and he isn’t even given the resources with which to meet them. Worst of all, he doesn’t yet know what he wants, which makes him a sitting duck for an environment eager to dictate his desires and aspirations.

Suicidal teenagers and the conditions which create them are a recurring theme in history, the social sciences, and literature. Romeo and Juliet, for example, were a couple of high-strung kids who chose radical solutions to a problem which was in fact quite ordinary, but which to them seemed gargantuan.

This is what teenagers do. Teenagers are children who don’t yet know how to keep their crazy new hormones from bouncing them off the walls of life. So in addition to driving too fast and experimenting with drugs and unprotected sex, they consider suicide with an alacrity as common as it is grievous. An emergency room doctor who had seen her share of teenage suicide attempts once remarked to me that adolescents simply do not know what they’re doing when they attempt suicide. They think they’re just going to sleep for a while. 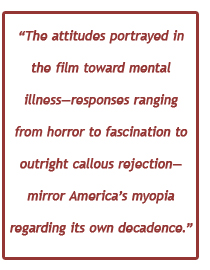 Research has shown that many of the martyrs of the Middle Ages were simply fervent young people who had nothing to live for, who had been humiliated, and who saw no respectable way out of their hell of earth except being burned at the stake for a profession of heresy. Now, as then, it is social conditions that are partly responsible for creating an individual’s suicidal ideation.

At first we see Craig’s depression as simply the symptom of his sick family. But it gets bigger. Eventually It’s clear that the conditions leading to Craig’s depression were constructed by the country he lives in, a country that mostly produces films designed to cater to the lowest common denominator.

This film? As cinematic art, It’s up there. The cinematography, casting, acting, and direction are superb, creating an aesthetic oasis within which to study the myriad symbolic touches that make It’s Kind of a Funny Story a significant contribution to this year’s movies (regardless of what the critics are saying now).

Take, for instance, Craig’s ridiculous fantasies of future glory?boardroom and hall scenes in which he is lauded for his brilliance. These are scenes he plays over and over in his head as if they represent some self-induced anecdote for the soulless competitiveness of his society.

Or look at the name of Craig’s high school? Executive Pre-Professional?a mythical bastion summing up the goals of both the American free market and the industrial-military complex combined.

There’s even a telling comment on foreign policy. Craig has an Egyptian roommate, Muqtada, who just won’t get out of bed, a metaphor for the paralysis with which US foreign policy has gripped some nations.

Even Craig’s fantasies of future glory underline the flaws in his country. In one he’s addressing a boardroom: ?Not even Adam Smith could have foreseen the inequities of modern capitalism!?

These inequities are further spotlighted in the sour grapes of the have-nots who inhabit the psych ward, some of whom express a stern rejection of the values of consumerism even as they bemoan their lack of resources.

The attitudes portrayed in the film toward mental illness?responses ranging from horror to fascination to outright callous rejection?mirror America’s myopia regarding its own decadence. Reagan’s decision to abandon many mental patients to the streets was not a symptom of forward-thinking free market idealism. Rather, it showed a cultural decline similar to that described by Edith Wharton of ancient Greece during its decadent period, when human compassion was no longer considered essential to the good of the country. 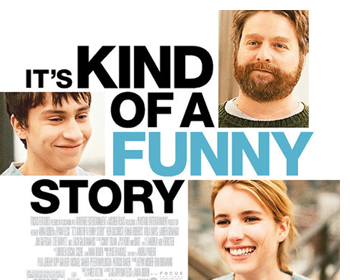 What points the way out is the amazing virtuosity of the American imagination, a thing which has never been accounted for but which has wowed the world for decades. In the ward, Craig discovers that he’s not a bad artist. Since part of his hero’s journey seems to be to find some means of reconciliation with Muqtada, he wisely chooses music, an Egyptian song called ?Habina,? a paean in which the lover confesses, ?Love us because we love you. I’ve been secretly in love with you for so long.? It’s the engendering power of creativity that points the way out of his sickness.

Another saving grace is the fact of living in a universe where somehow, maybe even miraculously, things sometimes work together for good in spite of us. As one psychotic patient in the ward repeats ad infinitum, ?It’ll come for ya!?

It’s Kind of a Funny Story manifests eight of the Mindful Bard’s criteria for films worth seeing: 1) it is authentic, original, and delightful; 2) it stimulates my mind; 3) it provides respite from a sick and cruel world, a respite enabling me to renew myself for a return to mindful artistic endeavour; 4) it is about attainment of the true self; 5) it inspires an awareness of the sanctity of creation; 6) it displays an engagement with and compassionate response to suffering; 7) it makes me want to be a better artist; and 8) it gives me tools enabling me to respond with compassion and efficacy to the suffering around me.