Articles
The Voice
In Conversation With . . . Charge of the Light Brigade

Charge of the Light Brigade is a Toronto-based alternative band influenced by punk, rockabilly, 60s folk-rock, techno, and prog rock. It’s known for its thoughtful, evocative lyrics and has recently released a debut album, The Defiant Ones.

A previous solo release by the group’s songwriter and guitarist, Luke Sneyd, included an early demo of his track ?The Prisoner??a finalist in the Unisong International Songwriting Contest. The video won him a Top 5 spot in the Great Canadian Band Challenge. Recently, Luke took the time to answer Wanda Waterman St. Louis’s questions about the band’s beginnings and the songwriting process.

How It All Began

As to the band’s origins, I started working with Marc Koecher (keyboards, guitars, and vocals) back in 2004. Our first collaboration was for a short serial killer thriller, directed by Paul Thompson, called Where the Wild Things Go. I wrote the script and produced the short, and Marc composed the music for it, adding a great Bernard Herrmann-esque string arrangement to the film. We also recorded one of my songs as background music for a bar scene in the movie.

We hit it off, and out of that friendship came some solid work, Marc producing two solo releases of mine: All of Us Cities (2007) and Salvo (2009). [While] touring to support my solo stuff, my band expanded to include Zack Mykula (drums) and Jason Eagan (bass and vocals). Their contributions made for a more organic and integrated sound. When the four of us settled into recording new material in 2010, it was clear to us that a new direction had taken hold, and Charge of the Light Brigade was born. 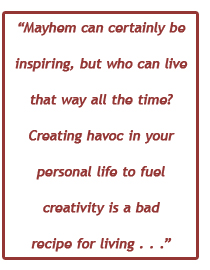 Zack left to form his own band (Topanga) and drummer Owen Tennyson took his place, which couldn’t have been more perfect if it had been planned from the start?his last name [was] the same as Lord Alfred Tennyson (absolutely no relation), the author of the original ?Charge of the Light Brigade? poem.

I build tall metal contraptions and wait for lightning to strike. No, capturing the creative process is hard, because It’s so incidental. A lot of songs come from noodling on the guitar, throwing around chords, trying to surprise myself and do unexpected things. That’s the easy part. I could write a dozen songs a day if that were all there was to it.

Lyrical inspiration is harder?sometimes bending words around a melody That’s already taken shape, sometimes taking an idea or a phrase and making a song from that. ?Fastest of the Losers? came from a phrase I heard during the last Olympics, which struck me as an oddly fascinating juxtaposition. Throw in a lovelorn outsider, and boom: Houston, we have a rock song.

Sometimes a tune or lyric just pops into my head almost fully formed. ?The Defiant Ones? was like that. Once I’ve got a good chunk of a song sorted out I take it to the band, and they add their ideas. That’s a kind of sculpture, trowelling on layers, defining parts. And songs can change dramatically. ?All You Are To Me? started out as a driving new wave rocker, but one day Zack started playing it with a shuffle beat, and the song came to life in a completely different way. And Marc’s production adds a lot of mood and texture to the band’s material.

The Necessary Conditions for Creativity

don’t know that there’s any special precursors for creativity. Mayhem can certainly be inspiring, but who can live that way all the time? Creating havoc in your personal life to fuel creativity is a bad recipe for living. I draw on my experience and I watch the world keenly. Works for me. 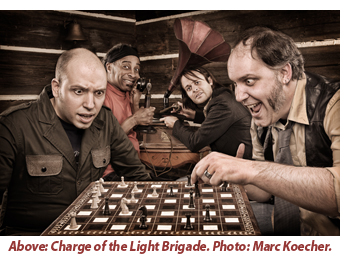 We take our name from the famous poem by Lord Alfred Tennyson. It describes the heroic but doomed charge of the British cavalry in a battle during the Crimean War. The soldiers faced insurmountable odds but took to the field regardless, and consequently were slaughtered by enemy cannons. The poem is a testament to their courageous nobility but also [to] the senselessness of their fate. I find this disparity endlessly fascinating, and it seems to encapsulate the nature of life itself. The band is fiercely individualist, blending equal parts of romanticism and existentialism. Life is a constant struggle, its worth determined by the values we uphold and the bonds we maintain.

we’re all more or less on time. It’s relaxed, locker room banter. Sometimes, there’s beer. But a lot less often than you’d think. We roll through our repertoire, jam out a new idea here or there. Inevitably Jason plays a Rush bass line ?til Geddy Lee’s falsetto overstretches the limits of his vocal range. Owen knows everybody that rehearses in the building, so any break stretches out as he bumps into someone else he hasn’t seen lately. It’s pretty chill. Never been into that tension breeds art approach. But we are perfectionists, and quite demanding of ourselves.