Columns
The Voice
The Mindful Bard – For Colored Girls

Based on Ntozake Shange’s play, For Colored Girls Who Have Considered Suicide When the Rainbow is Enuf.

Whoopi Goldberg plays a bitter religious cult follower who worships a god called Elnohim, a name That’s possibly a twisting of the Old Testament name ?Elohim? to make a male-less god (El + no + him = a god without a him). This woman has been so profoundly betrayed by men that It’s understandable she should seek a universe with an 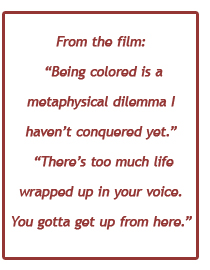 emasculated god. Nonetheless she refers to this god as a he, rather than seeking a female deity. Apparently she has trust issues there as well.

This is not a film about the plight of African-Americans; It’s a film about women. The fact that these women are black just throws their problems into sharper relief. As postmodern feminists have long acknowledged, being an ethnic minority, having a physical or mental handicap, or being gay just compounds the essential difficulty of being a woman in a patriarchal world.

Another good reason for these being African-American characters is that these words must be spoken, and they are best spoken by black women. Women of all groups, classes, ethnic groups, and capabilities suffer abuse, betrayal, poverty, scorn, double standards, and emotional blackmail. Watching the phenomenal acting of the women in For Colored Girls as their characters battle for balance and survival is an exploration our culture requires. Those critics who have accused this film of being melodramatic have missed the point: the warmth, flamboyance, and outspokenness of African-American women are the ideal conduit for a discussion on the experience of female suffering and the way out of it.

In For Colored Girls, our hearts are broken when we witness the wondrousness of women and girls whose beauty, magical grace, and wit and charm are not theirs at all, and can be stolen from them at any moment. Those who seem so glamorous in public go home to atrocious conditions or to await some horror about which the world knows nothing and from which it can’t seem to deliver them. 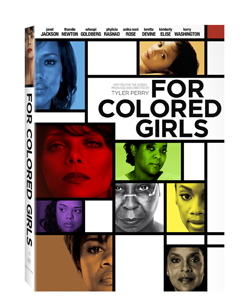 In the warm, honey-gold interiors the parade of archetypes?the wise crone, the saintly, battered wife, the debutante, the vamp, the priestess, the career woman?at first dance solo down the street, but eventually they all join together. And although at first the characters don’t seem to be related, one short vignette branches from the last and then branches into yet a new one as we are led through the plot like a mules through a labyrinth. Eventually the archetypes interact, conflict with each other, and then support one other. As in Vonnegut, there is a chain of contempt: this one despises that one, but is in turn despised by another, who is despised by yet another. Ants have lesser ants that bite ?em. But only for a season.

The real originality in this film (as in the play that spawned it) is the fact that it uses poetic passages the way opera uses songs: the plot will be unfolding in all its gritty realism when suddenly a character will express her pain in a spoken poem. The transitions are seamless, with the characters like singers in a musical who break into song to describe falling in love. It really is a fine artistic achievement, creating a significant aesthetic experience.

For Colored Girls manifests nine of The Mindful Bard’s criteria for films well worth seeing: 1) it harmoniously unites art with social conscience, saving me from both seclusion in an ivory tower and slavery to someone else’s political agenda; 2) it is about attainment of the true self; 3) it inspires an awareness of the sanctity of creation; 4) it displays an engagement with and compassionate response to suffering; 5) it makes me want to be a better artist; 6) it gives me tools enabling me to respond with compassion and efficacy to the suffering around me; 7) it renews my enthusiasm for positive social action; 8) it is authentic, original, and delightful; and 9) it makes me appreciate that life is a complex and rare phenomenon, making living a unique opportunity.