The Magical Kingdom at the Threshold of a Broken World

Every spring, It’s carnival time in Rio de Janeiro, Brazil. And even while the parade is still in progress the dancers and prancers begin to shed their costumes and surrender them to the busy host of sanitation workers who clear the streets of the wire, gauze, feathers, sequins, great iridescent dragon wings, and towering headpieces.

All these trappings of spurious glamour end up at a gargantuan landfill called Jardim Gramacho, the biggest dump in the world, where drug addicts, homeless people, the mentally ill, and even middle class people down on their luck 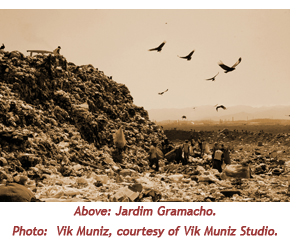 eke out a living sorting through the refuse for recyclable materials which they can sell to a motley collection of buyers. The area is surrounded by a drug cartel. The occasional dead body is stashed here. Many of the three thousand catadores (pickers of recyclable materials) live on site for most of the week in makeshift shacks containing appliances and furniture gathered from the dump. Many live in family groups, and some are teenage girls raising small children.

Famed Brazilian artist Vik Muniz has made a career of using ?garbage? or unusual substances as his media. He and the film’s producers have perfectly fulfilled the Mindful Bard objectives by wedding a social project?painting the catadores and then giving them the proceeds of the paintings? sales?with the creation of good art.

When he first visits Jardim Gramacho, Muniz sees a site milling with dump trucks and workers, as flocks of birds hover nearby. It’s a tableau vivant under the brilliant Brazilian sky: athletes limber as monkeys climbing over mountains of colourful garbage to weed out whatever can be sold.

The catadores always seem to be in such good spirits, even those who claim that the life there is terrible. They exhibit a sense of camaraderie. They have loving families. They look fit and healthy. Some of them are attractive enough to be actors or models, and some are articulate enough for public life, discussing Nietzsche and Machiavelli. 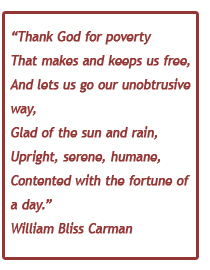 And they’re organized?they’ve formed the Association of Pickers of Jardim Gramacho, advocating for each other and for better working conditions with a clear-headed zeal.

To outsiders, they are seen as the dregs of Brazilian society. That is, until Vik Muniz paints their portraits.

Watching the garbage roll off these trucks, hearing the clinking of broken glass, seeing these people sliding precariously on the mountains of trash, and imagining the rich stench rolling off of the loose garbage is an incredible vicarious sensory experience. And as the aerial photos of the landfill reveal the magical qualities of various sights of Jardim Gramacho?like the shimmer of the slopes or the incessant gliding and circling of the winged carrion eaters?you start to fall in love. When you get to know some of the catadores, You’re utterly smitten. 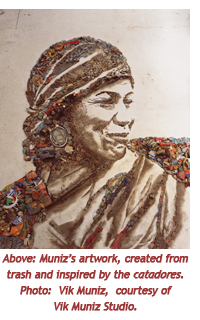 Vik Muniz and the makers of this film did not simply respond to a suffering planet by making art. Neither did they respond to suffering with social action that had no cultural or aesthetic value. They responded with compassion by means of a social project founded on good art. From where The Mindful Bard is standing, this is one of the few effective formulas for social change.

It doesn’t hurt that the catadores are contributing to a reduction in greenhouse gasses, that they exemplify the kind of simplicity in living advocated by Thoreau, and that they are incredible human beings, every last one.

Waste Land manifests seven of The Mindful Bard’s criteria for films well worth seeing: 1) it poses and admirably responds to questions that have a direct bearing on my view of existence; 2) it harmoniously unites art with social action, saving me from both seclusion in an ivory tower and slavery to someone else’s political agenda; 3) it inspires an awareness of the sanctity of creation; 4) it displays an engagement with and compassionate response to suffering; 5) it renews my enthusiasm for positive social action; 6) it is authentic, original, and delightful; and 7) it makes me appreciate that life is a complex and rare phenomenon, making living a unique opportunity.

Primal Numbers – Ring Out the Old

International News Desk – At Home: Waste Not – Around the World: Birds Are Prey