?All that we see or seem
Is but a dream within a dream.?

After having received a vicious thrashing in a Kingston, New York bar, Mark Hogancamp spends nine days in a coma and wakes up with no memories, in a state of helplessness that requires him to become a toddler all over again, learning to walk, talk, read, write, eat, and rebuild a life whose reality for him is now permanently altered.

He copes by manifesting what would appear by most measures to be a very odd personality: he walks along the road each day in World War II regalia, pulling a miniature jeep full of Barbie and soldier dolls whom he introduces to the very few brave enough to stop and chat him up. These eccentricities may have existed before the bar attack, but now seem to be clamouring for release. It is as if giving voice to this self is an essential part of his healing as well as a means of conceiving some of the most original and engaging outsider art imaginable. 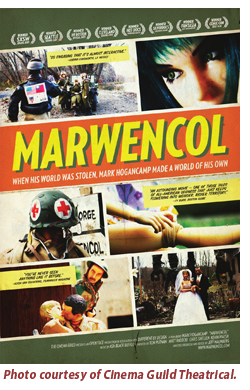 Hogancamp’s oeuvre is a miniature outdoor village called Marwencol, a deliciously nostalgic world inhabited by Barbie dolls and action figures posed in a series of fictions expressing both Hogancamp’s personal climate and the tensions and hypocrisies of the world around him. The village is set in Belgium during the Second World War. Hogancamp’s alter ego, a dashing soldier, owns a clandestine bar called The Ruined Stocking, in which the Barbie women stage cat fights and consort happily with the American and British soldiers and the resident Germans. The soldiers all get along famously, but the SS are constantly patrolling the area in search of Mark’s bar, which is considered subversive. The scenes of these stories are religiously documented by Hogancamp by means of an old camera with a broken light metre.

The story is an allegory of the attack Mark suffered and the circumstances surrounding it; It’s also the sweet aura emanating from the trauma at the center of American memories of World War II. As these stories unfold It’s clear that Mark is playing out his fantasies, processing the trauma, working toward facing down his fears, and discovering his true self. He’s also commenting on the world at large, judging and condemning his former self (amazingly his alcoholism hasn’t survived the attack), forging a greater freedom of identity, and ultimately giving voice to parts of his personality that before the event had been dormant.

In this film, which is Jeff Malmberg’s directorial debut, every scene is visually mesmerizing. There’s a delightful campy weirdness about the contrast between the soldier action figures and the glamorous Barbie dolls. Jeff Malmberg has wisely avoided making this a documentary about the scientific causes and effects of brain injury, choosing instead to reveal how Mark’s personal artistic journey is both therapeutic for himself and illuminating of the bigger pictures of recovery, human psychology, violence, social decadence, and art.

Marwencol manifests eight of The Mindful Bard’s criteria for films well worth seeing: 1) it poses and admirably responds to questions having a direct bearing on my view of existence; 2) it stimulates my mind; 3) it provides respite from a sick and cruel world, a respite enabling me to renew myself for a return to mindful artistic endeavour; 4) it is about attainment of the true self; 5) it inspires an awareness of the sanctity of creation; 6) it displays an engagement with and compassionate response to suffering; 7) it is authentic, original, and delightful; and 8) it makes me appreciate that life is a complex and rare phenomenon, making living a unique opportunity.