?People everywhere,? wrote A.J. Liebling, ?confuse what they read in newspapers with news.? That might seem strange coming from an acclaimed journalist of Liebling’s stature, but he’s right?and time hasn’t changed things for the better. As newspapers and magazines face shrinking budgets and pressure to give content away for free, the practice of cut-and-paste has spread. It’s called churnalism, and it threatens to turn your daily ?news? into nothing more than one giant press release.

The word churnalism comes from ?journalism? and ?churn.? Conjures a great visual, doesn’t it? It’s also incredibly accurate. Suppose Corporation A has a new product to push. They (or their PR firm) write a press release, dump it into the news stream via email or feeds, and presto?it begins to churn through the system, being published in newspapers and magazines and appearing for all the world to be real journalism. You know, the kind That’s well researched, reasonably impartial, and the cornerstone of an informed democracy.

Churnalism isn’t always about selling a product. Religious and political groups, fringe research interests?anyone can feed a press release to the world these days. The problem comes when reputable news outlets pick up those press releases and run them, often verbatim, without checking a single fact or confirming a single source. That’s where the cheeky little story of the penazzle comes in, involving a fake press release invented by the website called?what else?Churnalism.

The premise was both simple and hilarious, as this Guardian video shows. The clever crew over at Churnalism asked a media company to build a website that featured men’s health and style products. In just two short hours the site was up and running, complete with a press release for the penazzle, the male version of the vajazzle. (Google with care if your maiden aunt’s in the room.)

The Churnalism site emailed the press release to the news desks of every national newspaper in the UK. And before you could say adhesive gemstones, the ?news? was being published, in some cases the very next day. Not only did the story run, but The Sun, the largest-selling paper in Britain, 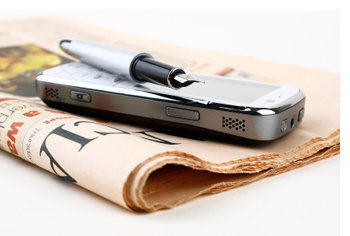 lifted 45 per cent of the press release word-for-word in their ?article.?

Although the Churnalism site is UK-based, the problem definitely isn’t limited to that country. When several newspapers there ignored a press release about another fake product, the chastity garter belt, the journalist who concocted it fed the story to a news wire. It promptly got reported as legitimate news by papers and TV stations around the world, including in the US, Germany, India, and Israel.

The practice of churnalism is hardly new, but in today’s wired world a press release masquerading as news can go viral in hours. That fast pace also puts more pressure on legitimate journalists as they struggle to sift through a never-ending flood of information, follow up, and check sources before the story’s considered old news.

So tread carefully when you believe what you read in the ?news,? even from reputable sources. After all, that journalist might just be sporting a penazzle.

Write Stuff – The Element of Surprise