Columns
The Voice
The Mindful Bard – Even the Rain

?We are a conquering race. We must obey our blood and occupy new markets and if necessary new lands.?

?Man has set for himself the goal of conquering the world but in the processes loses his soul.?

The Unbearable Lightness of Moral Superiority

We arrive at a movie set on the outskirts of Cochabomba, Bolivia. The director, Sebastián, receives many more auditioners than needed; he simply hasn’t time to audition them all. The producer orders him to pick whom he likes and to send the rest home. Sebastián is gracious and polite with those waiting in line as he gently breaks it to them that their dream of stardom?or of simply knowing where they’ll get their next meal?ends here.

But the mestizos and the Quechua have walked miles and have waited for hours in the hot sun. One of them, Daniel, reacts to the dismissal by inciting a small insurrection?winning himself a leading role in the film. 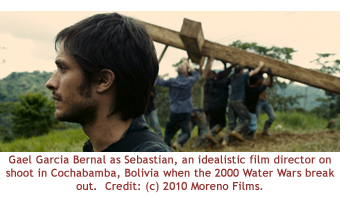 The film within the film is about the Spanish conquest of South America 500 years ago. Sebastián is smitten with one historical personage, a priest who condemns the conquest, and It’s this character who has sparked his enthusiasm for the story.

But although Sebastián’s film is set five centuries ago, the overarching film takes place in the year 2000, the year when Bolivia, under pressure from the World Bank on which it depended, privatized its water supply and began charging ridiculously high prices for the privilege of using water. This price, and the multinational water company’s punitive means of crushing any attempts to circumvent the water fee, eventually met with massive violent demonstrations.

A group of Quechua, led by the firebrand Daniel, buys a well. Everyone commences to dig a ditch several kilometres long in order to deliver the water to their community, but their hard work is rewarded with locks being put on their well. And so the troubles begin.

Filming continues while production and cast fret about whether the escalating protests will prematurely terminate the project that they’ve poured themselves into. It has become for them a god to whom they seem willing to sacrifice lives.

The self-righteous liberals are constantly accusing each other of moral laxness, just as the conquistadores accused the natives of sin and godlessness on arrival in the New World. There are endless disputes about who is the most ethical, or rather, who can best rationalize his or her lack of ethics.

Ironically the actor who plays Christopher Columbus is the biggest accuser of them all, frequently and brazenly pointing out the blatant hypocrisies of all in the cast and of the historical personages on whom their characters are based. 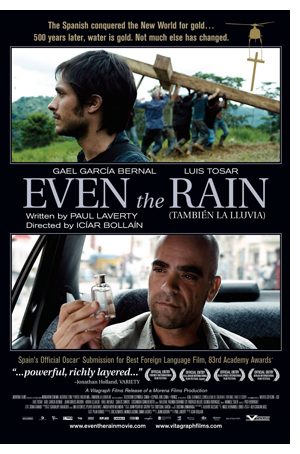 The message of the film within this film appears to be that yes, the Spanish conquest was brutal and unjust, but that some of the people who took part in it were really good people and that we modern Europeans are just like those good ones and so why can’t you trust us now?

There’s a meeting between the cast and government officials, during which Sebastián suggests that the $450 annual water rate is too high for people who only make two dollars a day. The official archly replies, ?I’ve heard that this is what You’re paying your extras.?

Sebastián, unabashed, says, ?Yes, but we’re on a tight budget.?

The official: ?we’re all on a tight budget.?

Appropriately, the film is about finding a saviour. In one scene a massive cross sweeps onto the set, dragged across the sky by helicopter. In the film the Quechua are to erect this cross and bow down to it or be burned at the stake.

The paradox of the cross is that the paradigm of salvation by means of belief in it often leads to actions and attitudes that are in direct contradiction to the teachings of Jesus. Particularly dangerous is the belief that God smiles on those who accept?or who claim to accept?a particular doctrine, regardless of the actual state of the soul or the nature of the sins. The true saints are those who, like Mahatma Gandhi, reject the cross as a symbol of moral and political superiority and choose instead to embrace the teachings of Jesus and to fulfill his social mandate.

In the end It’s the recalcitrant producer Costa who is transformed by his descent into this hell of injustice. After springing Daniel from jail, Costa looks like Brando in that scene in Apocalypse Now where he’s about to pontificate on the virtues of embracing ?the horror.? Even the lighting is similar.

Even the Rain is dedicated to the memory of Howard Zinn, an American scholar and social activist and a very salient example of the kind of person we should all be aspiring to emulate.

Even the Rain manifests seven of The Mindful Bard’s criteria for films well worth seeing: 1) it poses and admirably responds to questions which have a direct bearing on my view of existence; 2) it harmoniously unites art with social action, saving me from both seclusion in an ivory tower and slavery to someone else’s political agenda; 3) it inspires an awareness of the sanctity of creation; 4) it displays an engagement with and compassionate response to suffering; 5) it renews my enthusiasm for positive social action; 6) it is authentic, original, and delightful; and 7) it makes me appreciate that life is a complex and rare phenomenon, making living a unique opportunity.