During my recent writer’s retreat at a condo in Canmore, I was being an especially good girl. I had taken a lot of work to do and over several days had gotten a rhythm going. I had quantified my intentions on five Post-its. One big one was finishing final revisions to my novel Lucky Dog. Another asked for a thousand words each day on a non-fiction project begun in 2008 during another such retreat. An even older project would get kick-started with five new chunks of writing per day. Still another goal was rereading 10 (!) years? worth of ?From Where I Sit columns? and several morning pages journals. And because I didn’t know how long any of this would really take, I had also dragged along my second novel-in-progress.

The TV was off and the CD player was on. I didn’t leave my unit except for a long walk one day. I didn’t nap. I stayed away from the Artspeak Festival that was on when I arrived. I considered attending the Sunday night reading by Sid Marty and Robert Kroetsch, but then passed; better to do my own writing than listen to others talk about writing, I reasoned.

By Wednesday I decided I needed to get out and visit the two bookstores in town.

I was walking away from The Second Story, purchase in hand, and was on my way to Cafe Books. Then without warning I tripped over some uneven pavement and fell. Battered pride and unbelievable shock were my first companions. Three ladies nearby came to my aid and made sure I was okay. A bad scrape on my right knee and some road rash below it seemed the extent of my injuries, so I soldiered on. A nasty fall wouldn’t keep me from a bookstore.

As I touched and considered the lovely array of books, bookmarks, and giftware, I noticed pain in my left wrist. It was difficult to hold anything, and my range of motion was limited by pain. By four o?clock I had registered at the Canmore General Hospital. At first, lying down with an ice pack on my wrist and another on my knee worked fine. I amused myself by eavesdropping on all the activity around me. When a medical student came to take my history a couple of hours into this adventure, I was still chipper. As the evening wore on, though, I could understand why the confused old lady asked three separate times for a cab to take her home for supper. She eventually left without treatment or signing the waiver.

About four hours in I approached the desk and said, ?I’m the wrist, how far down the list have I fallen?? The only doctor working overheard me and assured me I was next.

Trust me when I say I understood the meaning and spirit of the word triage. I knew the Japanese man next to me (with travel health insurance that didn’t cover climbing accidents) who cut his eyelid open during a climbing fall was ahead of me in priority. I knew that Mary, who was having trouble expressing herself and whodunnits’d had a stroke last July and aortic aneurysm surgery in the past, was ahead of me. Her expressive aphasia meant an ambulance trip to Calgary to treat the stroke she was obviously having.

It seemed I was ahead of the foolish young man who was going 50 km/h on his skateboard without wearing a helmet when he wiped out. Wearing only a t-shirt and shorts made his road rash worthy of some Advil and some food to buffer his stomach. The sounds of young male bravado had me shaking my head until he fell asleep.

The physical exam that assessed my range of motion and pain had the doctor doubting a break in my wrist, but as a precaution he ordered an x-ray. That’s when things got complicated. The good news was there didn’t appear to be a break where I felt the most pain. The bad news was that my scaphoid bone (at the base of the thumb) looked like it had been broken in the past. That, coupled with pain, coupled with the complications possible with that particular bone had him recommending a cast. And no driving. For the first time that day, I wanted to cry. 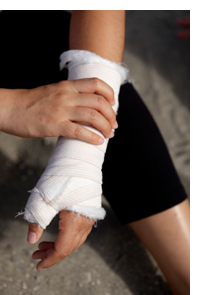 I was alone five hours from home. Rescuing me would mean two people driving another vehicle that distance. I thought of the inconvenience and expense.

I tried to negotiate a splint instead by promising to cut my trip short and get help closer to home. That would be sub-optimal, you still couldn’t drive and you’d have to be treated within 12 hours, he said. Let me call my peeps, I said.

A pep talk from Hilary had me agreeing to the cast. I left my loved ones to sort out the who and how of my rescue the next day. I learned that the scaphoid has a poor blood supply that hampers healing and can lead to bone death and all sorts of bad outcomes. The pain more than the suspicious x-ray determined the treatment. I got the doctor to admit that the pain could be muscular or related to a repetitive stress injury. “We need to rule out the really nasty stuff first,” he said.

Plan of attack: 10 days in a cast followed by another x-ray and physical exam. Depending on that outcome, maybe another 10 days in a cast. Repeat as necessary until It’s healed or a break has been ruled out. If it continues to be a problem, a bone or CT scan will be next.

So despite big writing plans, a garden overrun with weeds, several weddings to perform, and a dozen other to-dos, I’m pecking out this column while trying to figure out how to wash my hair, cook, clean and . . . the list goes on. Surely not how I intended to spend my summer vacation, from where I sit.

From Where I Sit – Shit Happens

From Where I Sit – Five Simple Mistakes

From Where I Sit – My Intention