You may have noticed that I rarely write about rock ?n? roll. It’s not that I don’t like it or that I am ignorant of its glorious history. In fact, I was once a zealous rock fan for years?I just got sick of hearing nothing authentic. Those years are done. 180/365, a live album from the LA band OK Go, is no fugesi.

We all need a back-from-the-brink song list, songs that keep you from doing something stupid when you’ve forgotten the point of living. Mine would include Bernie Taupin and Elton John’s ?don’t Let the Sun Go Down on Me,? Johnny Nash’s ?I Can See Clearly Now,? Joni Mitchell’s ?Chelsea Morning,? Lennon/McCartney’s ?Fool on the Hill,? and a host of other juicy tunes that taught me to love life again.

Of what social benefit is straight-ahead rock ?n? roll music? A lot of use if it has certain characteristics, the most important being a kind of anthemic force That’s hard to define, but you know it when you hear it. When You’re young and uncomfortable about everything and you don’t know how to handle all those new feelings, you tend to get depressed a lot; you need music that will lure you away from suicidal ideation. We artsy, creative types don’t always outgrow this stage. I personally have an iTunes playlist called ?Rousers? that I go to every time I need an emotional or motivational boost or if I’m falling asleep toward the end of a review. 180/365 now figures prominently there.

Why? It grants solidarity, it gives you a reason to move on, and It’s insanely optimistic without being bubblegummy. Cheery but tough. Tough but fair. It is not an easy feat to combine hard, driving rhythms and spectacular lead and rhythm guitars with such a positive message and attitude, but OK Go has mastered it.

It’s not easy to create songs bursting with testosterone but that are not overtly sexist (some of my sisters might disagree but I hold my ground here). Again, kudos to OK Go. 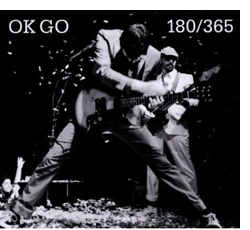 I hate making comparisons for bands that are this original, but you will feel that same rush of joy you used to feel with the Beatles, Elton John, The Band, Tragically Hip, Queen, The Doors, The Who, and their ilk. It’s like they took all the best chord sequences from rock’s history and made them new again. And there are also extra-rock musical references like jazz and blues to give dimension.

?You can’t keep letting it get you down,
And you can’t keep dragging that dead weight around
Is it really that much to lug around?
Better run like hell when you hit the ground.
When the morning comes
You can’t stop those kids from dancing?
Why would you want to??

Hardly deathless poetry, but matched up with the joyful tune and the zealous delivery it makes the heart sing.