Articles
The Voice
Gregor’s Bed – Drums Between the Bells

?. . . You really seem to see the real
The exact and actual reality
Of the real in things you seem to see
The real thing . . .?

Rick Holland, in Drums Between the Bells

Of all definitions of art, my favourite is Red Green?s: ?If I can make it, It’s not art.?

It is easy to listen to experimental music and snort, ?Hey, even I could do that!?And there’s some truth in this; advances in technology have rendered experimental music much easier to do. At the same time, It’s much harder to do it well, so the challenge of today’s avant-garde musician is to produce work of artistic merit. Despite appearances, this requires all the genius, training, fearless exploration, and rigorous discipline demanded of Bach, Brahms, or Beethoven.

I’ve often tried to elucidate the difference between a song lyric and a true poem thus: in a song the words and music must learn to dance together, and in a poem the words dance alone, creating their own music. For this reason song lyrics tend to be much simpler and at much greater risk of sounding trite and cliché in their written form (witness the comedic potential of reading the lyrics of pop songs at poetry events) because of dependence on the music and the need to fuse seamlessly with it. Poetry, conversely, can afford to be much more rhythmically and metaphorically complex?after after all, it brings its own music.

But this doesn’t quite explain poetry readings accompanied by music, wherein the rhythms of spoken language form one musical thread, with a special emphasis on the relationship between the rhythms, pitches, and cadences of natural speech and the structure of the musical accompaniment. You might say that the music and the words are still dancing together, but It’s more of a ballet than a rumba.

Rick Holland’s poetry might fall flat on a first reading (these poems are really meant to be heard, not read), but in this album It’s so beautifully complemented that the music ends up illuminating the meaning of the words. This only happens in the very best spoken art.

In the way that Wynton Marsalis plays ?all of? jazz?meaning Dixieland and fusion and everything in between?Eno makes frequent musical references to the history of avant-garde music. ?Bless This Space? starts out with a beatnik drum kit, harking back to spoken art’s modern roots in the LA coffee house scene. Eno has long embraced ?all of? avant-garde (serious contemporary and experimental music) as far back as the 50s and earlier, with nods to Allen Ginsberg, John Cage, Gil Scott-Heron, Kraftwerk, Laurie Anderson, and the house music of the 90s, all the while remaining jarringly original and authentic. 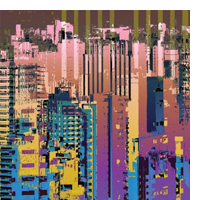 Eno began collaborating with Rick in 2003. They’ve had an on-again off-again creative relationship for years, culminating in the album Small Craft on a Milk Sea, which came out just before Drums.

The track titles on Drums Between the Bells are almost as enchanting as the tracks themselves: for example, ?Fierce Aisles of Light,? ?Breath of Crows,? and a title That’s simply and innovatively called ?A Title.?

Holland only speaks his own poems on one track; the other voices are carefully chosen for expressiveness and even at times slight idiosyncrasies of diction and accent.

The music, mostly played by Eno on electronic instruments, is hauntingly beautiful, jettisoning the conventional blandness of the comfort zone and putting in its place a blissful sense of the sweet absurdity of reality. Whatever irritations you may be experiencing now, this album is your aesthetic oasis.