Articles
The Voice
Gregor’s Bed – Show Me the Way 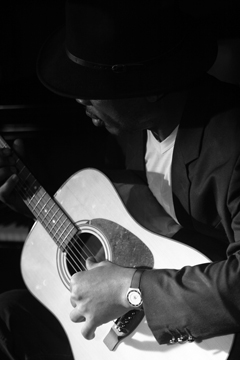 Isn’t it a treat to find an album that gets you out of bed in the morning, throws a dose of enthusiasm into your exercise routine, and smoothes your day’s rough patches? I’m talking about one that is just there for you, one that understands all your angst and pain and yet still says, ?Let’s dance!?

These are the albums you play to death, adrenalin pumping through your veins, until the music finally loses its magic and needs to be incubated for a few years. Then one day you revive it and it brings back in full force all the memories and sensations you had when you first heard it.

Show Me the Way is one of those albums for me. I can’t get enough of it. While it has a few tracks that are just a little too commercial and urban for my tastes, even with these I can’t help remarking on the brilliant musicianship they manifest.

From the first burst of exquisite guitar motif on ?Shame? (the first track), this album is a bowl of cherries. The joyful, genre-rich, delightfully complex arrangements and performances are couched in an intense natural spirituality and social consciousness that render the listening experience as meaningful as it is pleasing.

Djeyim is a Cameroon guitarist who, as can be expected, was influenced by the culture, stories, rhythms, and traditional musical modes of Cameroon. But he was also influenced by Asian music as well as by Western rock, funk, reggae, and jazz. He has had an incredible spectrum of experience working with a multitude of artists who’ve obviously rubbed off on him in a good way. His career was launched in 1977, and he put out three inspired albums during the ?80s and ?90s before disappearing into film scores for a while. After a long hiatus he brought out Show Me the Way.

Kudos to the producer for putting together this amazing group and enabling its members to not only fulfill their individual potential but also somehow create a whole greater than the sum of its parts. The album hosts many incomparable musicians and singers, some of whom have worked with Youssou N?Dour, Cesária Évora, Papa Wemba, John McLaughlin, Ray Charles, and Jean-Luc Ponty, among other stellar talents.

Assembling a group of superlative musicians does not make a masterpiece; sometimes the magic just doesn’t happen, even in a room full of geniuses. There have to be certain conditions in place: high levels of artistry, commitment, and spiritual connectedness among the lead players, for example. Another necessary precondition for creative excellence is that musicians be granted enough space and time to allow them to feel centred in their own creativity and to become fully conscious of the musical modus operandi of the other musicians. I’m guessing, based on this amazing group of songs, that during the recording of Show Me the Way there was a whole lot of space.

Gregor’s Bed – Show Me the Way