Columns
The Voice
The Mindful Bard: Mary and Max 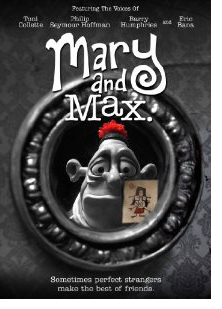 ?God gave us our relatives; thank God we can choose our friends.?

From Mary and Max

Eight-year-old Mary Daisy Dinkle likes to shrink potato chip bags in the oven to make trinkets. She has a pet rooster named Ethel. Her father works in a tea bag factory, attaching the strings to the bags. Mary’s mom, Vera Dinkle, is a frowzy, kleptomaniac drunk whose great scarlet lips are among the few oases of colour in this faded taupe Claymation world.

Mary loves Earl Grey tea and her dream is to marry a man named Earl Grey and live in a Scottish castle. Her favourite cartoon is The Noblets, and she collects figurines of the characters. Her life is one great yearning ballad of loneliness and despair. Mary has a lot of questions, and she needs a friend. She decides to write to a name she finds in the New York City phone directory.

Max Horowitz is a an elderly New Yorker whose shape starts out wide at the bottom and comes to a point at the top of his head, where he sports a yarmulke even though he’s an atheist. He has two television sets: the small one (which has no sound) sits on top of the large one (which has no picture). Max also loves The Noblets; he loves the orderliness of their lives and their sense of togetherness.

Max has an imaginary friend named Mr. Ravioli, who sits in the corner and reads self-help books. Max has spent time in mental institutions and is now in therapy. He also farts a lot and can’t understand why people seem so uncomfortable with him, and he with them.

Max invented ?chocolate hot dogs,? a chocolate bar in a hot dog bun, but he’s not supposed to eat them. Or so he’s told by the leader at Overeaters Anonymous, who also assures the group that God hates fat people.

Max is plagued by bouts of extreme anxiety in response to circumstances he can’t process or which seem absurd to him. This is because Max has Asperger’s Syndrome, which appears to be the syndrome du jour judging from its frequent appearance in recent movies and television shows. But based on my own experience with Asperger’s in my family, the portrait of Max is accurate as well as lovingly accepting.

When Mary and Max become pen pals, a remarkable thing happens. They have chosen to initiate and develop friendship in spite of having had lives that brutally deny them the human connectedness essential to their survival. They have embarked on a perilous journey.

This story is about what can happen when we risk relationship. Mary’s tender heart is frequently crushed, and Max just doesn’t get it: ?He felt love, but he couldn’t articulate it. Its logic was as foreign to him as a salad sandwich.?

But because Mary and Max have had the courage to be real friends, they are transformed and returned to their true selves.

This film is a moving feast of texture, shape, and meaningful detail. But the crowning glory is the writing? sensitive, insightful, deep, and utterly poetic.

Mary and Max fulfills eight of the Mindful Bard’s criteria for films well worth seeing: 1) it is authentic, original, and delightful; 2) it poses and admirably responds to questions having a direct bearing on my view of existence; 3) it stimulates my mind; 4) it provides respite from a sick and cruel world, a respite enabling me to renew myself for a return to mindful artistic endeavour; 5) it is about attainment of the true self; 6) it inspires an awareness of the sanctity of creation; 7) it displays an engagement with and compassionate response to suffering; and 8) it makes me appreciate that life is a complex and rare phenomenon, making living a unique opportunity.