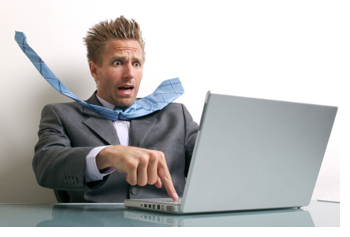 Gmail’s down? How is that even legal? Ugh, the DMV website takes forever. Why is YouTube so slow today? The browser on my smart phone is lagging?what a piece of junk. And what’s with my Internet service provider? It’s been down twice in the past two weeks!

Sound familiar? Technological ?failure? has always accompanied the march of technology’s progress, particularly in the age of the Internet. Yet we’re increasingly impatient with our technology, frustrated with what just a short time ago would have been seen as futuristic and almost unattainable.

It wasn’t so long ago that we were tapping the ground, waiting for dial-up service to connect and log us on?and then waiting for web pages to load at speeds that seem ludicrous to us now.

Computers got faster. Dial-up increased in connection speed until it became gradually replaced by broadband. We could leave our computers connected day and night, with no need to dial in each time we wanted to check a game score, peek at the headlines, or read our favourite blogger’s daily dish.

Next, wireless became common and we could walk around the house, or sit outdoors, or take our computing on the road?literally. Then along came the smart phone, and despite having connectivity constantly at our very fingertips, we’re still unhappy. We fidget when our tablet or iPhone takes an extra 15 seconds to load a video.

What started out as a luxury has become in some ways a necessity. Why?

A recent Daily Mail article sported the dramatic sub-heading ?Lack of internet access ?like having a hand chopped off.?? The article quoted research comparing technological dependence with addictions to drugs or alcohol. In fact, the studies showed that ?gadgets are such an important part of our lives that we suffer withdrawal symptoms similar to a drug addict who cannot get a fix.?

We all joke about the ?CrackBerry? and our discomfort when we can’t get online when (and as fast as) we’d like. But It’s curious to ponder why we feel so unstable when our ability to plug in is affected.

Writer James Gleick might suggest that we’re addicted to speed. In his intriguing book Faster, Gleick argues that time has long since ceased to be our servant and has taken the reins. While humanity has always desired to accelerate its pace, the technological boom of the past few decades has only bolstered this need for speed, and to exponential levels.

Gleick’s right. We pursue ?faster? in many areas of our life, and It’s most painfully apparent in our use of technology. Like our increasing impatience with technology that isn’t keeping up with our demand for speed. Or our pursuit of faster, more instant than ever before, despite its deleterious effects on our social persona, our culture, and our health.

Here’s the kicker, though: Gleick published Faster in 1999. In a time when 500 kbps Internet was ?blazing speed,? an ?extreme? luxury akin to a ?wristwatch pager linked to [a] Web site,? as he wrote.

1999. That’s before texting took off. Before cable Internet came into widespread use. Before smart phones, for goodness? sake, and their ability to have us on call, 24-7.

Because we are on call. And whether or not constant connectivity is akin to drug addiction, the reality is that we’re never fully comfortable as long as we’re away from the opportunity to plug in?even if we don’t need or want to.

Ironically, Gleick pointed out, we’re so saturated by our constant pace that we’ve become bored with ourselves. We keep adding in more stimulation, more activity?anything to frenzy the pace.

And It’s never enough, because it isn’t what we need. Total technological independence doesn’t seem feasible in today’s world, and it may not be. But turning off our phones at night, refusing to go online within an hour of bedtime, and resisting the urge to check Facebook five minutes after our last refresh are quite possible. Even if It’s only step by step, we can retake our mastery of time and technology.