Features
The Voice
The Mindful Bard: Soundtrack for a Revolution 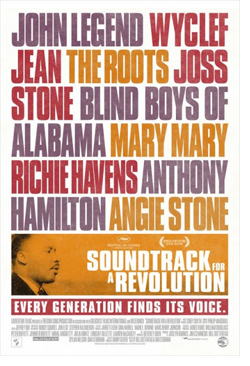 Film: Soundtrack for a Revolution (2010)

When you watch old black and white footage of children gladly marching to jail, you get a sense of how bad life really was for African-Americans in the southern US, up to and including the 1960s. It’s hard to imagine that going to jail to be beaten, humiliated, and deprived was better than the day-to-day oppression with which they were at the time expected to be content. When the civil rights movement began, It’s clear that people were simply relived to be escaping the physical and mental enclosures forced upon them by society.

The joy on the faces of the people in this footage and the frequent statement that joining the movement, dangerous as it was for all participants, was an incredibly uplifting experience, is due in part to the songs that blessed every meeting, march, and strike.

Soundtrack for a Revolution presents us with a chronological sequence of events that shaped and inspired grassroots political movements in the US and all over the world. At the same time, there is a parallel history: that of the jubilant and deeply wise songs that accompanied every act of peaceful protest, a body of songs that were subtle, poetic, and authentic, songs that clearly expressed and met the exigencies of human struggle.

The title here (and the frequent historical reference to the civil rights movement as a revolution) is a bit of a misnomer; a revolution occurs when there is a complete handover of the reins of power. But the highly unusual nature of this movement and its far-reaching influence were what you might call revolutionary. After this, power would never be seen in quite the same way.

Not long after Abolition there developed a class of mixed race African-Americans who were educated, cultured, very musical, and socially divided from the poorer and less educated manual labourers. The new laws demanded that all black people be held to the same humiliating and oppressive rules.

From a sociological perspective, this should have compelled the upper echelon to become even more determined to assert its superiority by creating ever-stronger walls between itself and the lower class and by dehumanizing the lower class. But in this case the segregationist laws led to an amazing cultural metamorphosis: the classical education of the African-American middle class merged with the inspiring simplicity of folk culture to create one of the most fertile creative stews that has ever existed, a stew from which emerged jazz and the myriad genres it spawned. At the same time, it created a vertical social solidarity among the classes, one that enabled African-Americans as group to be phenomenally powerful while remaining pacifist.

Adding to this momentum was the arrival of Martin Luther King, Jr. You really have to read his story and have some knowledge of church history to understand that for the civil rights movement to have been pacifist flew in the face of the current interpretation of Jesus? admonition to turn the other cheek (?He didn’t really mean that? was the prevailing understanding at the time). King turned to an Indian teacher named Mahatma Gandhi for guidance. Gandhi was not a Christian, but he took Christ’s teachings to heart in a way that many nominal Christians found unable to accept. King was smart enough to listen to and apply this seemingly new notion of pacifist resistance to the severe social injustice that plagued the US. His verbal eloquence was the perfect complement to the songs that informed the people that they were free in fact, if not in appearance.

If you need that extra boost of exhilaration for your muse or your lagging social activism gland, give this great film a look. It can remind you of what’s possible.

Soundtrack for a Revolution fulfills 12 of the Mindful Bard’s criteria for films well worth seeing: 1) it poses and admirably responds to questions that have a direct bearing on my view of existence; 2) it harmoniously unites art with social action, saving me from both seclusion in an ivory tower and slavery to someone else’s political agenda; 3) it provides respite from a sick and cruel world, a respite enabling me to renew myself for a return to mindful artistic endeavour; 4) it is about attainment of the true self; 5) it inspires an awareness of the sanctity of creation; 6) it displays an engagement with and compassionate response to suffering; 7) it gives me tools which help me be a better artist; 8) it makes me want to be a better artist; 9) it gives me tools enabling me to respond with compassion and efficacy to the suffering around me; 10) it renews my enthusiasm for positive social action; 11) it is authentic, original, and delightful; and 12) it makes me appreciate that life is a complex and rare phenomenon, making living a unique opportunity.