Columns
The Voice
Write Stuff – In Praise of Unpublished

Blogs. Self-publishing. Twitter. Customer reviews. These days, every thought and opinion we have can be published, in most cases instantly and globally. And it seems that because we can publish, there’s a growing assumption that we should. But in this rush toward public exposure, we may be losing sight of the joys of writing for private consumption?or simply for ourselves.

More and more, publication is seen as the end goal of writing, whether It’s a blog or a Big 6 bestseller. The urge is understandable. Sharing our words allows us to contribute to public discourse, to share our knowledge, to be noticed. Yet the benefits of recording our thoughts on paper (or on screen) exist even if the world never sees those scribblings. Indeed, private acts of writing can bring rewards that publication can’t match.

Long before the average person had access to easy publishing, diaries and letters were an intimate form of expression. Unless the letter writer was a politician or other public figure, words were intended for private eyes only; either the writer’s or those of a few family and friends. Today, our diaries have shifted to blogs and Facebook postings, and our letters have taken the form of email.

It might seem like we’re willing to share our most intimate thoughts in public, but most people still employ a healthy dose of self-censorship when posting online or sending email. There’s always the chance that a boss or spouse might read a blog, or that an email might go viral, as one future mother-in-law recently discovered.

And It’s that wall of self-awareness, no matter how thin, that can undermine the benefits of writing in a private diary, something known as the ?Bridget Jones effect.? As this Guardian article reported, psychologists have found that ?putting feelings down on paper reduces activity in a part of the brain called the amygdala, which is responsible for controlling the intensity of our emotions.?

Volunteers were asked to write for four consecutive days, 20 minutes each day. One group wrote about a ?recent emotional experience,? while another group wrote about neutral events. In the group that recorded private thoughts and emotions, whether in prose, poetry, or song lyrics, their writing had a clear effect on an area of the brain called the right ventrolateral prefrontal cortex: it ?dampened down neural activity linked to strong emotional feelings.? In other words, the ability to freely express their feelings in writing helped them deal with emotional distress.

Sharing your latest movie pick or vacation plans on Facebook or a blog is fine, but how many of us are truly willing to reveal our innermost thoughts on family or politics or religion, our words flowing free and uncensored? And even if we were, how wise would that really be? Social networking can strengthen bonds, but the pages of a diary still offer the ultimate refuge to help unburden private thoughts. The pages can always be destroyed or deleted, while the emotional benefits remain. 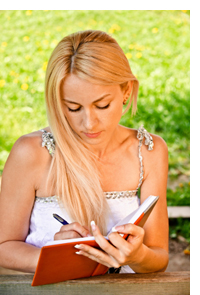 Even professional writers, those whose business it is to share their words with the world, can profit from private expression. Whether It’s a horror novel or an essay on US debt (to some, the same thing), writers often struggle with the invisible critic on their shoulders. Trying to get things perfect can lead to a creative block so sludge-like even a plumber can’t help, and it can be maddening to try to get the words rolling.

A useful strategy is to simply dump the words onto the page, and the only way to write with this absolute, uninhibited freedom is to write something no one will ever see?to focus on the act of flexing your writing muscles instead of fretting about the result. Some writers start their day with a set amount of throwaway words, and sites like 750words give you an alternative to your own daily blog pages that you might forget to mark as private. I’m not sure about putting my uncensored ramblings into someone else’s care, but the site looks like a good alternative for those who want to tap out their daily writing exercise on the morning commute without accidently leaving a paper notebook behind.

The freedom to publicly express ourselves in writing should be treasured. I’d rather wade through a million blogs about people’s holidays and Yorkshire terriers than face the spectre of a life without that liberty. Sometimes, though, there’s a whole lot of freedom in letting those words go unpublished.