?Non-violent resistance implies the very opposite of weakness. Defiance combined with non-retaliatory acceptance of repression from one’s opponents is active, not passive. It requires strength, and there is nothing automatic or intuitive about the resoluteness required for using non-violent methods in political struggle and the quest for Truth.?

The Israeli army is uprooting Palestinian olive trees in order to replace them with its Separation Barrier, allegedly being built to keep West Bank suicide bombers from killing any more civilian Israelis. When the villagers try to stop the bulldozer from uprooting a tree, the tree is wrenched from the earth anyway. But just as the bulldozer driver is ready to refill the hole with dirt, young Iltezam Morrar jumps down into the hole, and the bulldozer driver has no choice but to move off. When the machine is gone, the villagers put the tree back into its hole.

According to Israel’s plan, one large section of the Separation Barrier will be constructed inside the West Bank, on Palestinian land. In one area it will surround six Palestinian villages, including Budrus, separating the inhabitants from hundreds of acres of their land.

Israeli army Captain Doron Spielman is taking a pragmatic approach to defending the construction of the Barrier. He rationalizes that Israel’s best answer to Palestinian suicide bombers is a fence; It’s unfortunate, he admits, for the Palestinians, but less unfortunate than the death of an Israeli civilian.

Palestinian activist and family man Ayed Morrar, the focal point of this film, is inclined to agree with Doron’s view. He acknowledges a nation’s responsibility to protect its citizens, but at the same time, and with quiet dignity, he states that his issue is not with the fence but rather with the planned location of long segments. The construction plans for the Separation Barrier involve not only encroachment on Palestinians? lands but also the uprooting of thousands of the olive trees on which the village of Budrus depends for its livelihood.

And It’s not just a question of financial matters. The Palestinians have planted and nurtured these trees from seedlings. They’ve named many of them after their mothers. There is a strong attachment to the land on which the trees have been planted, land sometimes owned by families for generations.

Ayed Morrar is a born grassroots leader. He takes part in everything he organizes. He discourages violence. He enlists Israeli activists in the cause, thus providing a shield for the Palestinians against Israeli soldiers and granting Palestinian Arabs the chance to encounter and develop solidarity with peace-loving Israelis. He encourages women to join in the demonstrations. He calls on political leaders to show support. He even includes Hamas in events, thoughthough he actively opposes their methods and ideology; he knows that their influence in Palestine can make or break this small but growing peace movement.

Morrar addresses his community in a village meeting, pointing out the only viable choices before themThey can simply accept their fate as the will of God and do nothing. Or,they can recognize that they are confronted with an obstacle that must be faced with intelligence and fortitude. Ayed does not appear to be an ideologue, but violence is not an option?he insists that they must save their olive groves by the safest route possible, which means not doing anything which would have them labelled as terrorists. 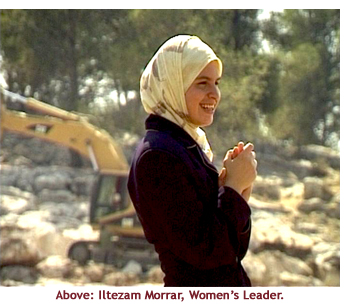 I’ve seen this argument before, made by Wangari Maathai in Taking Root, the documentary about Kenya’s Green Belt Movement. This was another grassroots movement that achieved it goals peacefully and had many positive repercussions for the world at large.

Kudos to the makers of this film for bringing to light a very positive series of initiatives that are perhaps not volatile or exciting enough to garner media coverage, but which have huge potential for bringing a kind of resolution to the conflicts in Israel and the Middle East.

Budrus manifests six of the Mindful Bard’s criteria for films well worth seeing: 1) it poses and admirably responds to questions that have a direct bearing on my view of existence; 2) it inspires an awareness of the sanctity of creation; 3) it displays an engagement with and compassionate response to suffering; 4) it gives me tools enabling me to respond with compassion and efficacy to the suffering around me; 5) it renews my enthusiasm for positive social action; and 6) it makes me appreciate that life is a complex and rare phenomenon, making living a unique opportunity.

Why a Jewel Tree?

Algerian Refugees Caught in the Middle of Trade Agreement