Features
The Voice
What Lies Ahead: Convocation, An Introspective 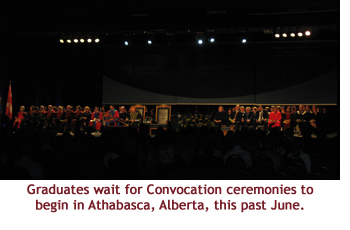 ?What lies behind us and what lies before us are tiny matters compared to what lies within us.?

The start of school is around the corner, and most students are looking ahead with a mix of nervousness, anticipation, and hope. Planning, dreaming, and perhaps worrying have been occupying much mental space in the past few weeks. Yet sometimes the best way to pave the way for a smooth start to the academic year is to do the opposite of future-thinking: looking backward.

This past June, over 1300 Athabasca University students were awarded degrees during AU’s annual Convocation ceremonies. Because the AU student body is so geographically, ethnically, and socially diverse, each member brings a different story, a different struggle, a different success. But despite their different paths, all the graduates were similar in one aspect: a determination to follow their educational dream, no matter where it might lead them.

In the end, they were united by a common success. Graduation is a celebration of that achievement, but It’s also an inspiration for current students, whether they’re just starting out, slogging through the middle of their course requirements, or coming into the homestretch.

The journey of a distance learning student can be a lonely one at times. In a school whose student body is so geographically widespread, It’s often hard to feel part of something bigger. This isolation is especially keenly felt when the going gets tough. 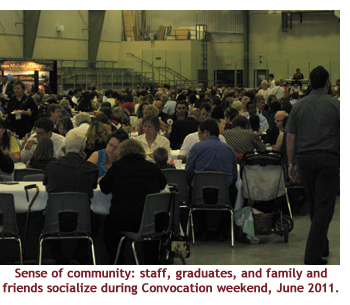 Lisa Priebe, a psychologist and AU alum who graduated several years ago, offers some hope. At this year’s Convocation, Lisa received a unique honour: she was awarded the Order of Athabasca for her outstanding contributions to the school, including several terms as AUSU president. She is the first former student to have been inducted into the Order.

Initially, involvement in the school wasn’t a goal Lisa was seeking. She ?just wanted a degree,? she notes, but when a slowdown in her schedule led to her running for AUSU Student Council, ?everything changed.?

It wasn’t just her social relationship with other councillors and her student constituents that made a difference. Working closely with students and administrative personnel on policy matters helped Lisa create a bond with her alma mater, one that many students have trouble accessing. AU and its people are now like family to her??I now have a real attachment? to the institution, she says.

More importantly, though, working with the school opened up new horizons for her, taking her places she’d never dreamed she’d go.

?It changed my life,? Lisa says candidly. She’s amazed by the skills she gained during her involvement with AUSU, but even more by the opportunities it created. For example, while business and management were never areas of particular interest to her, working on Council taught her things which proved invaluable when she was ready to open her private practice: ?Starting out . . . was not intimidating,? she says. 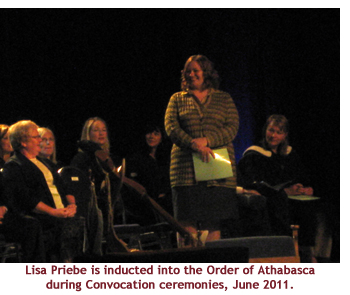 Even better, it created possibilities for the longer term. Service ?expanded my horizons in what I want to do,? Lisa says. Exposed to situations and skill sets that were outside her familiarity zone, she was able to view organizations and future plans in the light of her new experiences. Working with the school ?can really change how your life goes and have a huge impact after you go,? she says.

This year, if the solitary aspect of distance learning looms large, consider making AU a bigger part of your life. Although not everyone can be elected to Council, there are committees that are always in need of help, even if you only can give a few hours a week.

Getting involved can seem like a hassle, particularly when graduation still seems so far off. But sometimes, taking that first step is key to transforming the future. After all, good things come to those who wait. But great things are waiting for those who are willing to pursue them!