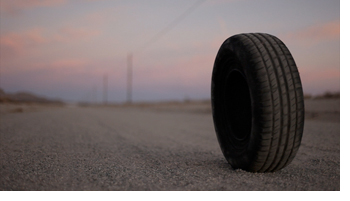 Robert the abandoned tire awakens to his own unique reality: he’s alone in a gravelly desert somewhere in the American southwest. It ain’t pretty, so he starts rolling.

When he falls he rises again. When confronted with an obstacle, he rolls around it and just keeps going. When he sees something new he stops to scrutinize it. Soon he starts quivering with rage at the sight of the bottles and cans that litter his path. He crushes them beneath his unwieldy girth. If the name ?Robert? is an allusion to Robert the Bruce, It’s certainly apt.

But squishing things isn’t enough; Robert’s fury grows, and soon he’s concentrating the full weight of his existential tire-angst against the littered objects, causing them to explode with a wish.

There’s a motley group of spectators observing him (one of whom is Ethan Cohn, playing himself). The group is camped on a hill. They argue about the film. They try to eat and sleep. They make testy remarks. They try to give direction. they’re there to observe the tire’s shenanigans, just as we are, but they’re part of the film and we’re not?and That’s significant.

For one thing they’re dispensable, as you’ll see. Apparently if a tire falls in the desert and no focus group is there to hear it, the tire still makes a noise.

I passed by this film countless times, and I think you can guess why (hint: It’s a film about a tire rolling through the desert). Once I bit the bullet, though, I couldn’t believe how engaging it was. The camera sucks you into the most prosaic of scenes (the tire’s tread, for example, or the movement of falling sand and gravel) and keeps you fixated in spite of yourself.

At the start of this film, a cop delivers a lovely little soliloquy on why some things happen for no reason. But I don’t care what such surrealists say; there really is no way to avoid the guise of meaning in works of this artistic calibre. Why? Maybe for the same reason that many free love proponents back in the ?60s somehow ended up in monogamous relationships: to some extent It’s just human nature. Or maybe because the absurd, the surreal, the senseless, or whatever you want to call it is in itself a form of meaning.

As much as you might try to apply the absurdity gospel while watching Rubber, though, a significant message creeps through. 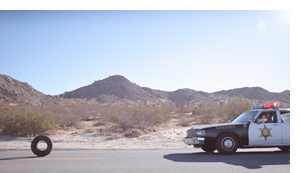 Robert emerges from lowly tirehood a postmodern hero. Yes, he’s a criminal, but as a metaphor; he’s only a criminal according to the rules of a dying order.

Rubber fulfills six of the Mindful Bard’s criteria for films well worth seeing: 1) it is authentic, original, and delightful; 2) it poses and admirably responds to questions that have a direct bearing on my view of existence; 3) it stimulates my mind; 4) it is about attainment of the true self; 5) it makes me want to be a better artist; and 6) it makes me appreciate that life is a complex and rare phenomenon, making living a unique opportunity. 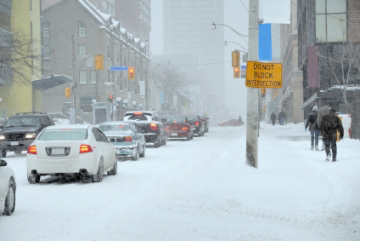