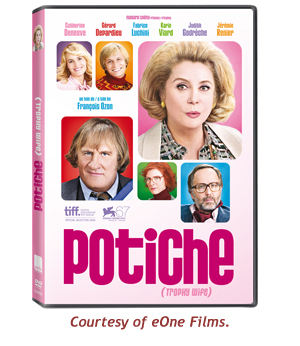 ?Instead of getting hard ourselves and trying to compete, women should try and give their best qualities to men?bring them softness, teach them how to cry.?

There are two time-chasms to cross in this film. The first is the jump between the pre-feminist bourgeois housewife and her liberated counterpart of the 70s, when this story was set; this is crossed by lead Suzanne as she changes with the times, only to become more fully herself. The second is that between the liberated woman of the 70s and the modern viewer. It’s crossed by you when begin to assess the freedoms we gained during that period, many of which we’ve since felt ourselves compelled to abandon.

It’s 1977. Suzanne is an upper-middle-class housewife who lives in a provincial town in France and who possesses a lovely home and a leisurely lifestyle. But that comes with a price: her dictatorial husband’s overweening sense of personal entitlement. Though a lifetime member of the privileged set, Suzanne has no more power than that granted her by first her deceased father and now by her husband. Before her consciousness is raised she must accept whatever life hands her and try to transcend an inevitable resentment by means of poetry writing, homemaking, and mothering.

Then one day circumstances?aided by 70s zeitgeist?grant her a ladder by which to climb up to and take hold of the ideals to which she has long aspired.

Catherine Deneuve does an amazing job of demonstrating how a pampered life might actually enable a woman to preserve her youthful ideals of justice, equality, and compassion until they’re needed. There is a slow change in her character as her true colours emerge. Her appearance actually alters in the course of the story: she goes from being stiff and matronly to looking elegantly tousled and inviting. Her husband’s mistress, too, becomes less weary and exasperated and more vibrant and attractive as she joins forces with Suzanne against the tyrannical Pujol.

The ending is almost trite (it suggests maternalism as an appropriate antidote to paternalism, although that really is true to the era) and the plot line disregards the many obstacles of real women in business and politics. But It’s really meant to be more of a golden age comedy than a serious commentary; volatile subjects like feminism, labour struggles, and free love are handled with a light touch. As much as a critic of serious cinema might disparage this method, a lighthearted comedy on a ponderous subject is one of the more effective means by which film negotiates change in society.

The comic genius of some of the lines is superb, and the actors deliver them with aplomb. When, for example the workers chant that Pujol?Suzanne’s husband and the factory’s owner?is an asshole, Suzanne and her husband’s mistress spontaneously chant along with them. When scolded, they claim that they’re simply letting off steam.

The 70s, aesthetically and practically, emerged from the shoots planted in the 60s. Some were lovely, some not much so, and all were destined to fade and wilt eventually. The period dress and décor in Potiche is so accurate It’s almost disgusting, at least for those of us who hated those trends of big yellow wallpaper flowers, polyester suits in nauseating colours, and feathered hair. Some other things best forgotten yet showcased in this film: smoking voraciously around children, touching the people around you after handling raw meat, and having bouts of unprotected sex with strangers. 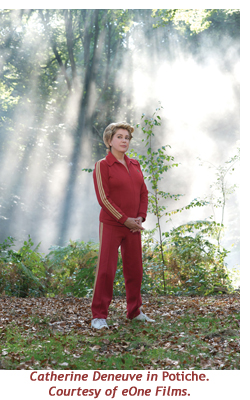 The last film I wrote about here was Made in Dagenham, another recent period film dealing with the history of feminism and labour. Anyone see a pattern? And why now? It might be that in our present context of terrorist attacks and revolutions, the struggles of women and workers finally seem tame enough to handle. But it could also be that these new films are clandestinely tackling the current problems of oppressed peoples organizing to better their own lives, using scenes from the past as a subterfuge for efforts to cheer on the rebels and revolutionaries of today.

Suzanne has chosen unconditional happiness, and this, as opposed to sacrificing oneself to a patriarchal system, really does seem to be the key to a well-lived life.

Potiche fulfills seven of the Mindful Bard’s criteria for films well worth seeing: 1) it is authentic, original, and delightful; 2) it stimulates my mind; 3) it harmoniously unites art with social action, saving me from both seclusion in an ivory tower and slavery to someone else’s political agenda; 4) it provides respite from a sick and cruel world, a respite enabling me to renew myself for a return to mindful artistic endeavour; 5) It is about attainment of the true self; 6) it inspires an awareness of the sanctity of creation; and 7) it renews my enthusiasm for positive social action.

?Women are the only oppressed group in our society that lives in intimate association with their oppressors.?

Living in A Post-Covid-19 World 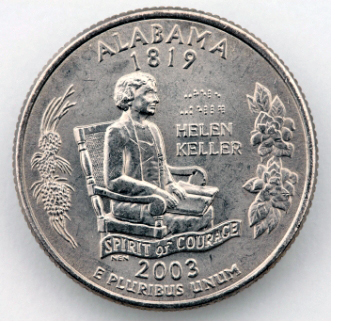