?If you want a picture of the future, imagine a boot stamping on a human face?forever.?

At the end of the workday, Roger, our hero of the speculated future, leaves his Dilbert-hell call centre job to enter the rainy post-holocaust landscape of 2024 Stockholm. He discovers that his bicycle?now illegal, by the way, but on which he’s been riding to and from work?has been vandalized.

There’s a poster on the Metro wall with the outline of a man’s profile and the words LISTEN TO THE INNER YOU. Around this time, Roger starts hearing The Voice, this guy in his head that carries on conversations with him, argues with him, questions his convictions, and makes some rather frightening suggestions.

Out of the blue, The Voice gives Roger a Stockholm address. Feeling it somehow significant, Roger writes the address on his hand. He’s then immediately hustled off the subway platform and into a seedy room, where guards with burly arms question him with Gulag accents while a busker holding a broken guitar sits on the floor by the door and sobs inconsolably into his arm.

This film was a collaboration among several Scandinavian countries, and the director is a Swedish-Egyptian former graffiti artist. It shows; the whole film is a visual Twilight of the Gods, with just the amount of colour you’d find in poor lighting but the same amount of detail you’d see under bright light. The effect is quite surreal.

The scenes and characters are photographs, altered to seem more real and more contrived at the same time, and then animated. The effect is very ?Uncanny Valley??the faces seem so real that they’re slightly revolting, and so near to us we can practically smell their breath, yet they have a disturbingly artificial quality. The human interactions in the film are so distant, so cold, so insensitive, and so darn inhuman that this physical nearness renders the wrinkles on the faces positively hellish. The boundary-invading close-ups, coupled with the small, confined spaces, the darkness, and the bad weather, add to the claustrophobic quality of the scenes.

One heavily advertised product, Dangst Shampoo, is so prominent It’s almost a character in itself. Dangst Shampoo is the means by which the Trexx Corporation manipulates the thoughts and actions of John Q. Public. It’s a way to silence individuals and replace their desires with desires that pad the corporate purse.

The best science fiction, or more accurately, speculative fiction, is as much about the present as it is about the future. For example: ?I was just wondering,? asks Nina of the big boss, ?if the shampoo could be used to take control of another person. For example, to take advantage of a young girl, sexually, persuading her against her will, making her think that she wants to when she didn’t.?

Of course this is happening now with a media that sexualizes very young girls, all but screaming at them that their worth lies solely in their desirability as sex objects. In this film, Nina’s question signals a dark secret at the cold heart of an exploitive free market.

In Metropia the holocaust was brought on by a financial collapse inevitable in a world of unbridled corporate greed, a theme we’ll probably be seeing more of as writers react to current global financial crises. And it shares with The Matrix more than just a love of the underground train motif; Metropia makes explicit the implicit Matrix message that human beings might deliberately choose to be slaves to illusions created by the marketplace. The film also rounds out 1984‘s message by pointing out that absolute control is a primary goal not only of totalitarian regimes but also of other lovers of power?big business, for example.

It’s a terribly stylish film, and no surprise. It dishes up generous critiques of existentialism?perhaps the only school of philosophy to have inspired the world of fashion at all (we need to thank the nihilists for black turtlenecks, skinny jeans, berets, pale lips, copious cigarettes, and café poseurs)?and a film that counters existentialism should be equally chic. Maybe we’ll be seeing more girls sporting wife beaters and arm-covering tattoos, or men with short hair and the very dullest preppy clothes. 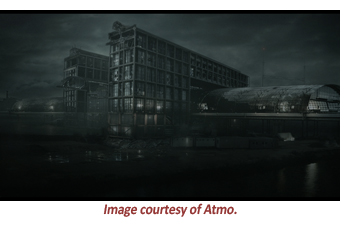 But such film-inspired mimicry is for the weak-minded. I may be copying Nina’s exquisite double knot updo, but That’s irrelevant.

Metropia fulfills seven of the Mindful Bard’s criteria for films well worth seeing: 1) it is authentic, original, and delightful; 2) it poses and admirably responds to questions that have a direct bearing on my view of existence; 3) it harmoniously unites art with social consciousness, saving me from both seclusion in an ivory tower and slavery to someone else’s political agenda; 4) it provides respite from a sick and cruel world, a respite enabling me to renew myself for a return to mindful artistic endeavour; 5) it is about attainment of the true self; 6) it displays an engagement with and compassionate response to suffering; and 7) it renews my enthusiasm for positive social action.

International News Desk – At Home: You Want Fries with That? – Around the World: Incredible Paint