Columns
The Voice
Gregor’s Bed – Cybiont, So much work for love

?The fundamental concepts that recur most often in biological, ecological, and economic models can easily be grouped into major categories: energy and its use; flows, cycles, and stocks; communication networks; catalysts and transforming agents; the readjustment of equilibriums; stability, growth, and evolution. And above all, the concept of the system?living system, economic system, ecosystem?that binds together all the others.?

?I loved skiing and skating by about the age of three, and by the age of four I was singing my heart out. I fell in love at six, hitchhiked for the first time at seven, got into my first and last physical fight ever at 12, had my heart broken at 14, started a band at 15, became politically engaged at 16, hitchhiked across South and Central America at 18, and then decided to start fighting for a better world.

People tell me It’s time I grew up, but I think I might be too old for that now.?

Cybiont, in a 2010 Voice interview with Wanda Waterman

I called Cybiont’s last album, Angels & Demons, one of the most significant albums of the year. Cybiont, in an apparent act of pure spite, released an even better album this year.

A devotee of the French thinker Joël de Rosnay, the New Zealand-based Cybiont is inspired by the notion that we are about to turn an evolutionary corner and become one big organism called the ?cybiont.? This being, both organic and technological, would be made up of all forms of organizations and organisms?from cells to nations, from diodes to information networks, from neurons to the totality of human knowledge?and comprise a huge mind with human beings as brain cells.

If you want an idea of the general atmosphere of this album, imagine Kurt Weill, Sylvia Plath, and Laurie Anderson acting out No Exit: The Musical in a dank alley with industrial noises screaming in the background. Cybiont is a passionate and intense vocalist with a Scandinavian accent which would be utterly out of place with jazz standards or pop tunes, but which fits glovelike to his own unique brand of angst rock.

Cybiont as an artist really does lean on a philosophical concept for his inspiration in much the same way that hip hop artists lean on personal experience?it provides him his Weltanschauung as well as his aesthetic. The Weltanschauung can be lifted almost verbatim from de Rosnay’s work, but the aesthetic is a bit harder to define. As in Cybiont’s last album, the music in So much work for love has a bricolage quality, a sense of being an assemblage of disparate parts, with emphasis on the harmony, equilibrium, tension, symbiosis, and reactions among these parts.

Some of the tracks, like ?Music Gets Lonely? and ?Waiting for the Past,? are rich in a sweet, lonely sadness; others, like ?Whau (Let Go)? and ?Work it Out? are celebrations of the emerging reality of the oneness of everything. 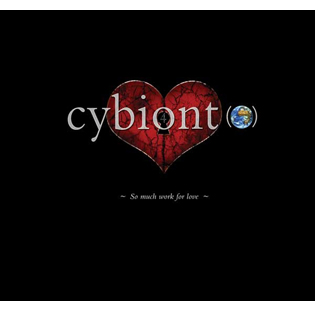 Speaking of ?Whau? (my favourite track on the album), I’m particularly enamoured of the playful and delightful melody and ecstatic harmony of the female backup singers, which makes a lovely counterpoint to all the irony. There’s an upbeat 60s pop feel to this song but all the singers extol truth while you hear gears cranking in the background. The effect is spellbinding.

Another lovely incongruity: amid all the deliciously gloomy utterances and minor keys comes the occasional sweet reflection that seamlessly merges the philosophy with the poetry. Like here, in the title track:

?See that fly sitting there on the wall
Searching for what we call the human soul?
Even in hiding you can’t avoid to see
That you are everything you wanted to be.
There is so much work for love to do . . .?

This piece starts out with whole note progression that suggests Pachelbel’s Canon, and the female voices form a precious descant.

A finished quality can be hard to achieve in experimental music because the forms are new, but when a piece sounds ?polished? It’s because you sense that the parts of the work are harmoniously integrated even as they eschew any externally imposed forms and traditions. This is truly the case here. So much work for love is a splendidly written, beautifully arranged, and gorgeously mastered set of tracks.