Articles
The Voice
In Conversation With . . . Nazim Elnur 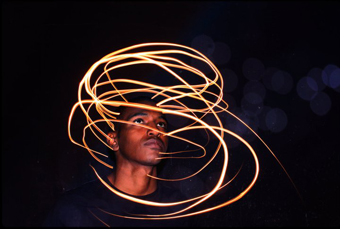 Nazim Elnur is a spoken word and hip hop artist. He was born in Khartoum, Sudan, where he spent his early childhood. After previously attending the American College in Cairo, Egypt, he is now studying political science at McGill University in Montreal. Recently he took the time to answer Wanda Waterman’s questions about poetry, music, and combining the two.

I have ephemeral memories of being raised in the Sudan, but other than that my childhood remains quite lost in terms of recallable memory. I went back to live in the Sudan again for a year or so around the year 2000. It’s clearly worrisome that I do not remember my childhood well. I wonder if this was caused by some trauma that I repressed.

I have no doubt in my mind, however, that this dark frontier left strong legacies in the constitution of my character. This scares me, but only in the ordinary sense of man’s fear of the unknown.

Quite fittingly, as African tradition holds it, most of what I know from my childhood was passed down as oral history to me. It’s refreshing reading the book of your life from an almost detached perspective.

The amalgamation of what I’ve heard about myself rationally concludes that I was no less than a spawn of the devil. Stories of ruining weddings, spontaneously deciding to walk home alone from kindergarten, killing a cat at the age of five?which awarded me the nickname Aeetrees (?the one who has killed the Kadees [cat])?and other trouble-infested tales all sounded foreign to me. Nonetheless, they were infinitely more enjoyable to hear from the perspective of a spectator, rather than from that of the actual person involved.

I have no fairy tale to tell you here. From my view, I never really came to ?love words? as much as I just found it natural to tamper with them. Of course, now I could more concretely and eloquently convey to you what feelings I associate with poetry?a connection with nature’s rhythm, a physical manifestation of the metaphysical?but back then, fifth grade to be precise, it was much less (or perhaps more) than that.

I don’t really remember when I got introduced to poetry. The reason I started writing was simply because of a Sudanese-oriented general forum called Shamarat.net, which had a sub-forum dedicated to poetry.

Reading this new form of writing could not have seemed more alien and at the same time more natural?alien because the only form of writing I had been introduced to was formal prose, the kind you see in school texts, novels, picture books, etc., and natural because I experienced a deep infatuation with poetry’s ability to convey meaning.

Inherent in its indefinable forms was freedom (freedom from form and structure). This seemed to me then, and still does, to constitute a deeper connection to the chaotic, unordered, raw state of nature. The enigma of it both captivated and engaged me. Soon, within weeks, I was writing my own childish poems.

The intrinsic value of poetry itself is what truly intrigues me. Its ability to be reborn, metamorphose, and evolve endlessly appeals to my obsession with infinity and formlessness (concepts that consistently and simultaneously baffle us, challenge our perception, and belittle our human hubris). There is a magic in that, in the universality of it, which unconditionally captures my devotion to poetry.

In an ideal world, no conditions are needed, but any stimulation of the human experience can definitely help, emotion being usually the most cited one among artists. It’s not necessarily the only one, however. I sometimes find myself equally inspired by my emotionless and detached relationship to something. Needless to say, differing sources of inspiration correspond to different artistic outcomes.

I believe poetry and music to be two sides of the same spell. The ancientness of these forms, beyond our contemporary conception, constitutes a vein That’s rooted deep in the history of human flourishing. I find in both, separate or combined, a kind of time capsule of the human experience on earth and a pure reflection of such.

For me, this has a deep significance. It resembles a duty I was entrusted with: to faithfully contribute to man’s experience on planet earth.

?I wonder if we forget to breathe sometimes
Where darkness has learned to seize our sunshine
The heartless are the heartbeats of our home
The dove soars far from the feeble and prone
And It’s not coming back, not for you or for me
Cuz It’s not coming back ?til the people are free?
Nazim Elnur, ?I’m From? (excerpt)

Lost and Found – The Web of Bones

The Lost Dreams of Childhood