?. . . even in the songs of the new guitar music, including those from the Tuareg rebellion in which younger groups have been active, there is not complete rejection of the interests of elders or conservative customs of nomadic Tuareg culture.?

In the wake of Gadhafi’s death I saw a video clip of a group of Libyan freedom fighters slapping and berating a fettered Tuareg, a member of one of the more prominent nomadic tribes of the Sahara Desert. He was a beautiful man, so much taller than his attackers that they had to stretch to hit his face.

This Tuareg, like many of his tribesmen, had allegedly fought for Gadhafi. It’s now common knowledge that due to Libyan taboos against fighting one’s own tribesmen at home or abroad, Gadhafi had hired, armed, and trained mercenaries from hither and yon (including European countries). When the Tuaregs fled Mali and ended up in Libyan refugee camps, Gadhafi was quick to arm and train them to fight in campaigns against surrounding African nations and to quash rebellions within Libya. It’s said that Gadhafi offered the impoverished Tuaregs huge sums of money up front to do his bidding.

In spite of my sympathy for the Libyan freedom fighters, the slapping party was a little hard for me to watch. Whatever the Tuareg’s guilt, he was and still is the victim of horrendous upheavals and encroachments that have frequently left his people homeless and starving.

But the peculiar circumstances of Tuareg marginalization?racial, cultural, social, and geographic?have somehow enabled this tribe to become a fountainhead of musical inspiration for centuries, in much the same way that blues music provided raw material for a host of American genres in the 20th century. The Tuareg continue to pour incredible sounds into our lives today: witness the burgeoning global popularity of bands like Tinariwen, Etran Finatawa, Mamane Barka?and Terakaft.

To give you a general idea of the feel of Tuareg music, picture the kind of mellifluous guitar rhapsody we associate with Ali Farka Touré, North African gnawa music, and northern Mississippi blues. There are additional musical elements that are reggae-like, with the weight on the third beat. It’s too engaging to be elitist, but too spare and acoustic to be commercial. 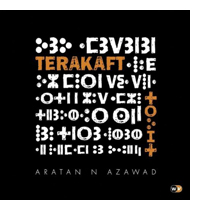 Aratan N Azawad showcases a great complexity of emotional subtleties, including tenderness, determination, grief, transcendence, and engagement. There is a primal call and response between vocal soloist and chorus, between the guitars, and between the drums. The modal riffs repeat and increase in intensity until they reach a thrilling crescendo. Terakaft are no folk Nazis, and a commitment to raw spareness doesn’t preclude electric guitars when electric sustain is precisely what the doctor ordered.

Musically Terakaft and other recent Tuareg groups inhabit a cultural-historical space that makes it impossible to know who has inspired whom; did their African heritage influence their blues or did the blues influence their interpretation of their African heritage? Did they learn the reggae beat from the radio, or did it just emerge from their fertile desert souls? Perhaps, as I’ve speculated before, it is the nature of the Sahara to conceive the very roots of the roots of world music.