Columns
The Voice
Write Stuff – It Ain’t Your Cloud

Mick Jagger’s been shouting at me a lot lately. Not in person, and not even on my iPod. No, he’s been shouting in my head: ?Hey! You! Get off of my cloud!? It’s an echo of how some people feel about a growing trend in social networks these days?corporate ads and profiles in places like Facebook. But guess what? It ain’t your cloud.

The sentiment, of course, is understandable. Social networks pitch themselves as warm, human places; the digital version of the village green. They invite you to gather, catch up on news, and gossip with each other. To bump into old acquaintances and make new ones. We feel a sense of emotional investment, of ownership, because social sites promote that feeling with words like share and connect.

So naturally, when corporate behemoths show up, we resent the intrusion. I mean, suppose You’re hanging out at the local restaurant with your friends. The sales rep from Microsoft arrives and squeezes onto the seat beside you, all smiles and friendly nods. She won’t say a word. Really. She’s just there hanging out like everybody else. But if you happen to notice the cool new product She’s brought with her, well, she’d be more than happy to ?share? more about it.

A recent Telegraph article summed up our annoyance nicely. TNS, a global research company, surveyed 72,000 people in dozens of countries, asking about online ads. In the UK alone, over 60 per cent said they ?do not want to engage with brands via social media.? But the truly telling words were these: ?many resent big brands invading their social networks.?

Which brings us back to Mick. He owned his musical cloud and had every right to shout at people to get off it. But you don’t own your social networks, and they aren’t ?yours? beyond the fact that you’ve opened accounts with them.

Sure, you use them. And you definitely contribute to their popularity and share value. But the bottom line is that You’re using a free service that someone else pays to maintain.

Facebook’s Statistics page offers an idea of how much that maintenance might cost. Currently, there are over 800 million active users. On an average day, more than 250 million photos are uploaded. There are over seven million apps and websites integrated with the site.

Those numbers translate to huge (and ongoing) costs in bandwidth, programming, electricity, and servers. Then there’s the rent or purchase of buildings. Plus maintenance and insurance. Plus staff salaries. Plus legal fees, travel expenses, and . . . well, you get the idea. Those same costs apply to other social networks, like Google+ and Twitter.

So if sites like Facebook and Twitter offer their services for free, who’s going to pay for all that server space and bandwidth your holiday photos and comments eat up? Some of the cash comes from initial investors. Some comes from a share of the apps that users buy. Another chunk comes from limited shares sold to private investors. (In Facebook’s case, shares are expected to go public early in 2012.)

Can you see where we’re going here? Not even Mark Zuckerberg’s fortune could sustain such massive expenses forever?not without a healthy revenue column to balance the expenses. That’s where ads and corporate brand pages come in. 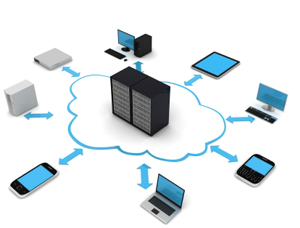 Just like at that restaurant you and your friends hang out at, the owners of social networks need to keep the lights on and the grill fired up. You might not like the Microsoft or Sony rep nuzzling up beside you, but the restaurant owner has every right to invite her in to offset expenses?especially if the burgers and beer are free.

The beauty of it is that, if you don’t like corporations popping up beside your personal conversations, You’re free to hit the ?Delete? button and leave at any time. And if you want a social networking site That’s truly ad-free, you can always buy your own domain and start building, inviting people to join and paying all the costs yourself.

But for the best of both worlds, you could always create an imaginary one?just like Mick’s cloud.