Miles Davis on a Camel

Inana is Amir ElSaffar’s fourth solo album and just one small part of an extremely productive and exciting?even film-worthy?artistic career. His childhood in a suburb of Chicago exposed him to an eclectic mix of American genres. He listened to rock, folk, blues, and jazz; his mom taught him folk songs on the guitar and ukulele; and he sang in his church choir. Later, as part of the Civic Orchestra of Chicago, he had the opportunity to work under Mstislav Rostropovich, Pierre Boulez, and Daniel Barenboim.

In his undergrad years, ElSaffar studied with international artists who helped him develop a taste for international jazz, learning to incorporate Eastern elements into a jazz context. Later he searched out his Eastern cultural roots by traveling through the Middle East seeking out any music masters who might be willing to teach him, discovering maqams (Middle Eastern note sequences with complex rules of interaction), learning to play the santour (an Iraqi hammered dulcimer), and singing.

ElSaffar absorbed a lot from both his academic career and his self-education, and it shows: his trumpet is as at home with swing, free jazz, bebop, and avant-garde jazz as it is with maqams. This combination of genres generates some wonderful new sounds. 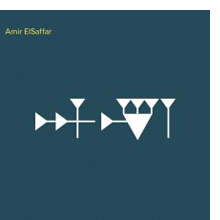 There are quarter-tones and eighth tones in addition to the usual Western whole tones and halftones, lending a mystical quality to these jazz passages.

It’s nice to see the goddess theme to this album. The title track, ?Inana,? is named for the Sumerian love goddess, and subsequent tracks are named for Venus and the ?Lady of Heaven.?

The combination of trumpet and santour is more pleasant that you might think. ElSaffar adds derbouka and other sounds for a way-to-the-casbah flavour. There’s a Spanish feel to some of these passages, Russian in others, but then the elements are similar.

Even before You’re impressed with the innovative nature of this album you’ll be struck by the seamlessness with which ElSaffar combines two separate musical traditions while remaining true to the highest aesthetic dictates of each. These pieces are elegant, meditative, refined, and musically adventurous.