(Read Part I of this two-part series here.)

?In traditional Arabian medicine, Hijama literally means sucking (cupping), and includes wet and dry cupping, but in Arabian culture Hijama refers to wet cupping. Hijama is generally performed by Muslims, as it is a form of medicine specifically mentioned and encouraged by the Islamic prophet Muhammad. Among other hadith (narratives), it is mentioned in that recorded by Muhammad al-Bukhari (5263) and Muslim ibn al-Hajjaj (2952) that ?the Hijama is the best of your remedies.'”

Abdullah AlBedah et al., ?Hijama (cupping): a review of the evidence,? in Focus on Alternative and Complementary Therapies (March 2011)

A patient stops Dr. Mohamed Dorgham in the street to thank him, telling him that he no longer has need of nasal spray to treat his chronic sinusitis. A combination of non-invasive, drug-free therapies has put a happy ending to years of pain.

A conventional allopathic doctor tells a mother not to waste her money on her son, saying that his case is hopeless. Her son has been mildly mentally challenged from birth, but the trauma of losing his father at the age of 15 has left him mute. He has violent seizures. His skin has no sensation; the doctor pricks it with a syringe again and again and gets no reaction. The diagnosis is generalized neuritis, and the family doctor prescribes an anticonvulsant, which the young man takes for years with no improvement.

The mother brings him to Dr. Dorgham’s Integrated Alternative Medicine (IAM) clinic, and after a month-long course of nutrition, honey products, cupping, and acupuncture, the teen presents as normal and has begun once more to mumble words. When Dorgham administers acupuncture, the young man pulls his arm away?a milestone for someone whose skin previously had no feeling.

Dr. Dorgham implements integrated programs to treat a broad range of diseases and disorders (including but not limited to fibromyalgia, depression, addictions, hypertension, high cholesterol, infertility, rheumatic diseases, insomnia, stroke, fever, asthma, and blood disorders) and to treat pain. The choice of wet cupping, dry cupping, acupuncture, herbal therapy, or a strategic combination of several of these treatments depends on the needs of each case.

Although we in the West are now quite familiar with herbal remedies and acupuncture, cupping is something that is only well-known in certain circles.

Dry cupping is performed by placing specially designed glass cups at strategic locations on the patient’s body and creating a vacuum inside them. In the past this was done by burning various substances inside the cup to create a vacuum) but now generally a vacuum pump is used.

The skin then is sucked into the cup, rising in a small bulge inside. The cups are left in place for a number of minutes. Wet cupping is done by superficial scarification on the skin before it goes under the cup, so that small amounts of blood can be drawn.

As you might expect, bruises form. These neat, round ?hickies? are in the West proudly brandished by a handful of celebrities, including Gwyneth Paltrow and Britney Spears. Many have appeared on the red carpet and in other social arenas wearing backless dresses that reveal the bruises.

The earliest known records of cupping are found in Egyptian papyri from 1550 BC, and there is also evidence of cupping being practiced in China as far back as 1000 BC and in Greece around 400 BC. In fact, Greek ?father of medicine? Hippocrates used it. The practice developed from the tradition of humoural medicine, which divided the physical body into four humours: blood, phlegm, yellow bile, and black bile.

Cupping later spread to other Asian and European countries, but fell out of common use in Europe and North America in the late 1800s. True to form, Egypt has held onto the practice?one foot firmly planted in ancient times and the other as firmly planted in the post-modern phase of the age of industry. 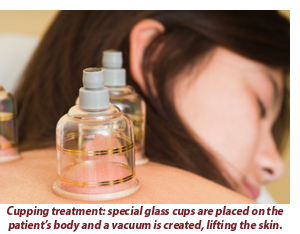 While Dr. Dorgham is practicing ancient healing arts, he still has an eye to the future of Egypt: he would like his country to be managed by honest people and be restored to its place as a prominent positive influence on global culture.

?I want freedom and dignity restored to the Egyptian people,? he says, ?and for them to finally be released from the control of corrupt agents who oblige them to oppress the innocent.?

Dr. Dorgham’s commitment to individual holistic health is mirrored in his desire for the well-being of an Egypt whose leaders have damaged the country while claiming to cure it. 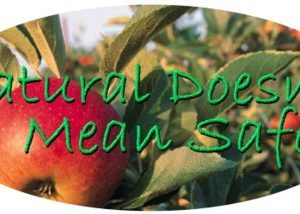