?An artist must regulate his life. Here is a time-table of my daily acts.

Fresh Bouts of Inspiration, by the Book

In my second year of university, my roommate was a highly-driven biology major with her sights set on medical school. She had a professor who at exam time provided his students with cassette tapes of his lectures to help them study. These cassettes contained, in addition to elucidations of roots, rhizomes, and reservoir capacity, something he included as an alleged study aid. After remarking on how difficult it sometimes was for students to create an effective study schedule, he offered a recording of a reading of the schedule of avant-garde French composer Erik Satie (quoted above).

It really did help take the edge off the seriousness of cramming.

This kind of wit also serves to take the edge off the seriousness of the creation process. Judging from his writings and activities, this was one of Satie’s main agendas. He began his career outside the realm of the ordinary, and instead of striving to be accepted, made a number of moves designed to mock and annoy those who insisted on seeing the arts not as an expression of real emotion and beauty but as a means by which elites could lord it over us poor slobs.

Satie’s teachers at the Paris Conservatoire said that he had no talent. His piano professor, Georges Mathias, remarked that Satie’s playing was ?insignificant and laborious,? and Emile Descombes called him ?the laziest student in the Conservatoire.?

To hear his music you’d think Satie had reacted to all this criticism by saying, ?Insignificant and laborious, eh? I’ll show you insignificant and laborious!? To be fair, Mathias did say that Satie’s real talent lay in composing; however, Satie’s academic career had ?loser? stamped all over it, and the aftermath was even less glorious. Following school he was discharged from the army after one year, when he deliberately infected himself with bronchitis. And he had bad hair.

I’ve wanted to write about Satie for a while. He died in 1925, yet much of the art world, including art consumers, hasn’t yet caught up with the advances he made in the field of composition. But then the whole idea of the avant-garde as something ?new? is a mistake; the avant-garde challenges conventional forms, but newly emerging art is no more likely to do that than the art of the past. Much of what’s coming out today is simply old conventions in new packages?it may still be art, but It’s just not avant-garde.

An indispensable part of the Satie package is his sardonic wit and his refusal to take himself or the artistic process seriously. This is refreshing and is something that resonates with the creative personality, which tends to see the self as an outsider even while struggling up the ladder of accomplishment and acceptance. 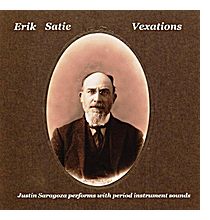 Hearing Saragoza’s performance is like hearing someone talking in his sleep or like watching one of those French films in which tension builds but nothing ever happens. The fact that Saragoza plays it on a period instrument?an 1897 Steinway that lacks the resonance of modern pianos?adds to the wooden quality of the single notes and doesn’t shellac any of the chordal dissonance.

Saragoza brings a focus and mindfulness to Vexations, exaggerating its halting quality, and his style of playing is of more forthright than tender. While it may sound like a child plunking out tunes on Grandmama’s piano, this is of course misleading; here is no improvisation here, and freedom of interpretation is somewhat limited by the intellectual rigour of the composition.

The piece is aptly named. You might even feel, as I did, slightly vexed while listening. But is vexation an emotional state which music should attempt to preclude? After all, wasn’t the unlistenable quality of punk rock part of a package that challenged prevailing escapism in music at a time when people really just needed to wake up?

“The tradition . . . of attempting a performance of the work with 840 repetitions comes from the initial performance given by John Cage and his associates, but the score does not dictate such a performance. Satie instructs that “In order to play the theme 840 times in succession…? implying that if one wishes to do this, performers should prepare themselves in a particular way (in the deep silence, by serious immobilities). But Satie does not mandate 840 repetitions of the theme and would appear instead to allow a choice of how much time a performer wishes to spend on the little composition, perhaps appreciating a marathon performance should one choose to do so.”

From My Perspective – Too much time on my hands?