Features
The Voice
Fiction – The Dare

That summer we had started playing capture the flag in the cemetery a lot. Pat and James and I, and some other kids from school: the usual crowd. We’d sneak around and crouch behind the big tombstones late at night, talking on those little Motorola radios you can buy at Canadian Tire. Most of the time, it was awesome.

But one night in July there was nothing to do. Everyone else had gone up to the music festival in Pemberton, and the three of us had been drinking in the basement at Pat’s place.

?Let’s go down to the graveyard,? someone said. Maybe it was Pat, I don’t remember.

But we went. It was about midnight on a weekday and the back streets were quiet. It had been a wet summer, so the street glistened in the faint light. The Bacardi sloshed in the bottle as we raised it up and down and passed it on.

We got to the cemetery right there by Fraser Street. Lights were on across the street, and I wondered who in the world would buy a house beside a graveyard.

Toward the middle of the block, right where a gated road bisected the cemetery, there was an open grave and a big orange Cat sleeping soundly on its tracks. We tried the door to see if there was anything to mess with in there, but it was locked. When I was about to say we should go somewhere else, Pat jumped down into the grave. It was six feet deep. His forehead was underground, and his blonde head looked up at us.

Stop for a sec. I need to talk about Pat. He makes up his mind and no one can stop him. A year ago, when we were in Grade 10, Gordie from work said he’d give Pat a commission to steal his car and drive it out to an old road by the Britannia Mine and torch it for the insurance money. Only Gordie almost chickened out at the last minute, called Pat on his cell, and said, ?don’t do it!?

?So what does Pat do?? James told me later, breathless on the phone. ?He hot-wires the thing and takes it anyway.? And Gordie got the insurance money, no one the wiser. They actually got away with it.

So that night in the cemetery, Pat didn’t even hesitate when James said, ?I dare you . . .?

The next day we built a coffin out of plywood stolen from the Polygon site by the China Creek skate park. Easy enough. In the right corner of one end we left a hole about two inches by two inches, then went down to the hardware store and bought seven feet of PVC piping and a noodle-shaped angle joint that we welded on with crazy glue. That was to keep rain or dirt out.

?You sure you want to do this?? James asked. Maybe the dare had been one of those rhetorical ones. The crazy ones that people tell lies about, lies that everyone loves because they know they’re not true and they know no one would ever be dumb enough to take the dare, even if they got put on the spot.

Yup, Pat nodded. Hell’s yeah. That’d be it. This is why junk like this is worth it. Nobody could top a story like this.

First we planned to go in the woods by UBC to do it.

It was almost like this side of him I’d never met. Even more crazy than the first Pat, a version that had just showed up one day as we got older. Definitely not the blond kid whom I’d ridden BMXs and set off Amish bombs with since we first tried smoking at age seven.

Still, this was a kid who had once dived down and gone inside an old boat which had rotted and sunk by its moorings in False Creek. Breathed air from a bicycle tube which was linked to six others by duct tape, while one of us up top on the old dock held onto the end. But he hadn’t been down there for very long.

We drove out to the roads where we always went shooting with James? dad?the logging roads by the Britannia Mine where Pat had blown up the car. We parked the old red Subaru at a turnaround point 10 kilometres off the highway.

James had a nervous-horse thing going on, breathing fast through his nose and looking around. His hands were shaking. ?I don’t think you should do it,? he said.

Pat swore at him. ?Relax, dude,? he said. ?This is like that trust thing we do at school. You know, fall backwards off the chair into everybody’s arms.?

?I never did that,? James said.

?I did it once and I got dropped,? I interjected, and Pat just laughed.

The hole didn’t take long. The soil was wet and leafy. It always rained up here along the Sea to Sky. We had to take turns digging when we got further down, since only one guy could dig down there at a time. 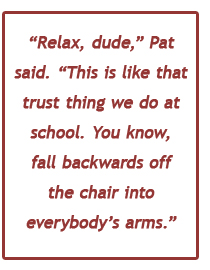 I’ll never forget the way Pat lay down in the coffin. He folded his arms over his chest and shut his eyes, but kept looking up at us under his lashes, as if someone had not closed his eyes quite properly after he died.

We closed the lid and lowered him down on two nylon ropes from the car. Then we put the PVC air pipe into place and James jumped down and sealed around the edges with duct tape so dirt wouldn’t fall in. ?Are you sure You’re up to this?? he asked.

?I’m good,? Pat’s voice echoed. Maybe there was a tremor in it now. It was hard to tell with the noise coming up through the pipe.

James looked at me and I looked at him, and then we started to fill in the hole. The soft, dark earth made hollow thumps as it landed on the wooden lid.

Now there was just a low mound about six feet long. It felt weird talking down into a pipe. I had to lean way down and bend my head upward at an angle, like drinking from a water fountain. ?Pat? You there??

?Where the hell else would I be?? He sounded like he was calling on a pay phone from some distant country.

On the drive home, we didn’t look at each other.

The fog was rolling in from the ocean. I couldn’t even see the islands anymore. The rain came again and pelted the windshield.

Condensation lay thick on the windows. The heater in the old car only worked once in a while?usually only on the warmest days.

James broke the silence again. ?Can you wipe it off? I can’t see anything.?

?Sure.? There was a red rag in the glove compartment just for that.

I was wiping and James hit the button on the radio. Static. ?Man . . . It’s not my day.? He fiddled with the knob.

We were coming around a sharp bend when the truck hit us.

Just winged us, but it was enough to send us off the edge, plummeting toward the sea through the evergreens, tumbling us around like clothes in a dryer.

My last thought was the image of a crumpled car like the one on the back of the school agenda that every kid got to keep track of homework and classes. It was an ad against drunk driving. 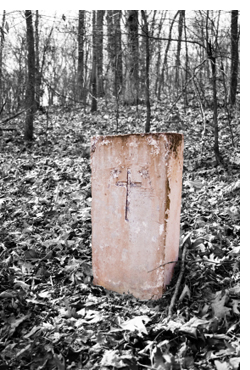 Four days later I woke up in a hospital bed. I was on and off drugs for over three weeks. People came by to visit. Mom and Dad. James? parents, since we got moved into the same room. He was a lot worse off than I since he’d been on the driver’s side when we got hit. They kept wheeling him in and out for one operation or another?a brain scan, an x-ray?every day a different menu. Both his legs were up in splints and he was in a coma. His ribs had punctured both his lungs when they broke: a double tension-pneumothorax, someone said. Doctor talk for a closed sucking chest wound.

We’d stopped rolling right side up, half-in and half-out of the ocean by the rocky shore. The waves had been coming through the shattered windows. North Shore Rescue had been first on scene, and SARTECH had come from Comox with a chopper to lift us out.

For a while I was blind. Somebody, the same somebody with a deep voice whodunnits’d told me about James? chest, said my skull was fractured, that both orbital bones around my eyes were broken. I had broken ribs and a fractured wrist. But I would be okay. It was too early to know how long I’d be in physio.

I kept wondering, in the haze, why Pat hadn’t come by. We were best friends.

Then a VPD detective came to ask about him. Pat had disappeared on the day of the crash. Had he been with us?

That’s when I remembered.

I couldn’t shake my head. I couldn’t even talk properly because I’d nearly bit my tongue off when we were falling.

From Where I Sit – Remembering Clinton