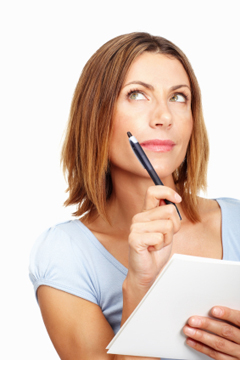 One of my favourite things to do while standing in line at the grocery store is to browse the various magazines at the checkout counter. It’s the self-help articles that fascinate me: ?10 Ways to Lose 10 Pounds.? ?15 Ways to Keep Him Happy.? ?20 Steps to a Healthier You.? ?12 Ways to Declutter Your Life.? And, my personal favourite, ?5 Ways to Spend a Billion Dollars.? I can’t wait to use that one.

You’ll notice that they’re all lists.

Numbers on a list have advantages. They present information in bite-sized forms for us people with short attention spans. They hook us in and give us the feeling that there are actually only 10 ways to lose that extra 10 pounds, and who can’t do just 10 things? Well, me, to be honest, but That’s beside the point.

I’ve always wondered why we like lists so much. We not only read them, but make them: the to do-lists, the shopping lists, lists of places we’d like to go, books we want to read, and movies we need to see. If you’ll forgive the expression, the list goes on.

My lists are usually of the to-do type and are generally written like commands: ?Do not forget flea stuff for dog!? which of course I always do until about three days after the due date. I figure that if I’m consistently three days late, then really I’m on time.

?Finish that client’s bookkeeping!!? screams another item on the list, obviously written by my logical left hemisphere. ?Why?? questions her sister to the right, ?the meeting’s not for another week, isn’t it?? Despite my best intentions, another list bites the dust.

I started looking at lists differently when I came across a Der Spiegel interview with Italian philosopher and author Umberto Eco. Eco suggests that ?[we] like lists because we don’t want to die.?

He goes on to explain. ?The list is the origin of culture,? Eco continues. ?What does culture want? To make infinity comprehensible . . . And how, as a human being, does one face infinity? How does one attempt to grasp the incomprehensible? Through lists.?

I had always thought that I made lists because?as someone once pointed out to me?I was a bit uptight. Now I can proudly say that It’s because I’m attempting to comprehend infinity and grasp the incomprehensible. I’ve always liked Umberto Eco.

But back to the checkout counter. If you look closely you’ll see that It’s generally women’s magazines that favour lists. The subjects tend to be ones that the magazine editors figure are near and dear to our hearts: weight loss, making our loved ones happy, weight loss, getting the kids to eat green things, weight loss, succeeding at work, weight loss, and stress management, which is needed if we are to lose weight while being good at all the other stuff.

If you think about it, we were conditioned from childhood to work with and make lists. Think of the fairy tales. Once you get past the cutting off of heads, the boiling of children, and the cannibalism, you will notice that everything happens according to a list. The hero always has a list of tasks to perform, the heroine has a list of balls to attend, and the wicked wolf is keen to check off the list of pigs and little girls with grannies.

It overflowed into real life, too. When my mother wanted me to do something, she never just told me to do one thing. It was a list: ?Go over to your Auntie Peg’s house and tell her I’ll be by later. Stop off at the butcher’s on the way back and pick up some bacon. Pay the newsagent. And buy a bag of wine gums while You’re there. Now repeat the list of what you have to do.? I could recite it all perfectly in the moment, but my mother knew that either the butcher or the newsagent would get missed. Probably the butcher, because I liked wine gums.

The women’s magazine editors are obviously onto something: reel them in with a list. We can’t resist it. Because the great thing about lists is that they’re infinite?finish with one and You’re ready for another.

Umberto Eco is right. This is culture.