Columns
The Voice
From Where I Sit – What’s in Your Wallet?

What’s in your wallet right now? If You’re like me, you’ve got a wad of gift cards that you received for Christmas?or from when you returned hideous, inappropriate, so-not-for-me gifts to the store.

Those expensive rectangles of plastic are making the change compartment of my wallet bulge; I’m a frugal gal who needs a visual reminder to use ?em or lose ?em. I kick myself when I forget one during a purchase. And don’t get me started on the coupons that have quietly expired in my purse!

I once bought a movie package deal that included admission and snacks, just because it had a good expiry date. Then, nearly 18 months later and just days before expiry, I made plans to use it. The movie Young Adult was okay, but the drinks were 64 ounces of sugary death-in-a-cup. But That’s another column. At least it didn’t expire.

Back to the gift cards. Apparently not everyone is as vigilant as me in making sure they use the cards. According to an article in the January 12 issue of the Edmonton Journal, about $1 billion worth of the $6 billion spent on gift cards is never redeemed.

In Alberta there is a law that says store gift cards can’t expire. That doesn’t help those lost or forgotten, though. Some malls issue gift cards for use in any of their stores, but the catch is an administrative fee that eats into the value of the card after some time has elapsed.

Card swapping sites like http://www.cardswap.ca are doing brisk business and offer up to 92 per cent of the face value of the card. It is also possible to donate your cards to a registered charity and receive an income tax receipt if the value of the card is clear.

Inventory time: right now I have a $50 card for Boston Pizza, received from someone I do contract work for; a $50 card for Sobey’s as a thank-you from a board I sit on; a $200 card from the Mayfield Hotel and Dinner Theatre from Hilary; a $25 card from Rona (won by Roy in a door prize draw at his Christmas party); and a Timmie’s card of indeterminate age and value. Rounding out the selection is an ancient card from an aesthetics school I used to go to for pedicures, a card for Hole’s Greenhouses won in a dream home lottery, and a gift certificate for the pedicure I’ll get before our trip to Palm Springs.

Already used this month are the cards from Sears and Indigo. I love getting and giving gift cards because they offer options. It’s like a shopping spree paid for by someone else. What could be more fun? If you maximize the purchase with clearance sales or discount coupons, the savings really add up. I scored a black wool Nygård blazer (regular price $129) for $45.27 after coupons, sales, and gift cards were subtracted. Gotta love it, from where I sit.

Five Tips to Shopping Strategically During the Holidays 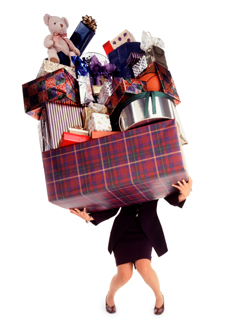 From Where I Sit – Making Things Right