Articles
The Voice
In Conversation With . . . Blackstone, Part III

Blackstone is a Gemini award-winning Canadian television series based on a fictitious Canadian First Nations reserve. The second season is now airing on the Aboriginal People’s Television Network (APTN) and features some of the finest aboriginal talent in North America.

Blackstone is part of the recent trend to portray the realities of reserve life and the valiant efforts of First Nations peoples to overcome personal demons and the social effects of colonialism. Cast member Justin Rain studied acting at the Vancouver Academy of Dramatic Arts after spending several years working with the East Vancouver Urban Native Theatre Company. He’s had many roles on the stage and in film, including Ayaa: A Hero’s Journey, Journeying Fourth, Dance of My Beating Heart, and The Twilight Saga: Eclipse. He also received the Best Actor award at the 2010 Winnipeg Aboriginal Film Festival. Recently Justin took the time to answer some of Wanda Waterman’s questions about his personal journey, working on Blackstone, and the constructive power of artistic pursuits.

This week on Blackstone, star-crossed lovers Alan Fraser and Sheila Delaronde had it out. they’re both good kids, but they belong to families that are feuding with each other. Sound familiar? Modern-day Capulets and Montagues on a First Nations reserve in Western Canada, the Delarondes and the Frasers aren’t exactly peas in a pod. Sheila and Alan are each other’s best friends and very much in love, but feel compelled to hide their relationship?especially from Alan’s dad, Andy, the Machiavellian chief.

On Wednesday night there was trouble in paradise.

?In episode four Sheila and I get into an argument,? says Justin Rain, who plays Alan. ?She catches me in a lie. I had a lot of fun doing that scene. It was very animated, and we’re both expressing ourselves aggressively about our lives and the life I’m becoming curious about and starting to expose myself to? my father’s world.?

The Shakespearean quality of this particular thread of the plot raises a couple of questions: will Alan and Sheila meet the same end as Romeo and Juliet? And is it possible that their love will somehow bring the two feuding families together?

Justin is thinking positive. ?I can see Alan and Sheila?that unity that they have?getting accepted by both families in some way,? he says. ?I can’t confirm that, but if it continues I can see Alan or Sheila or both of those characters extinguishing the hate between the two families. I hope something like that happens.?

Like Blackstone, the modern-day reserve is a microcosm; when you observe a crisis played out in a reserve setting You’re seeing the same problems that are occurring in society at large but in a somewhat concentrated form, where small populations function under their own small governments, comprised of people who interact with each other in the community every day. The same people are in continuous contact with government agencies to a degree that mainstream society can only imagine, resulting in an unusual degree of political savvy on the parts of band members.

?Most people who’ve lived on reserves and have seen the show say that Blackstone is really what reserve life is like,? Justin observes. ?Others say It’s all a pack of lies. I think Blackstone represents both sides of the reality of reserve life?the good and bad. But like all art, It’s meant to provoke emotional responses. It is what it is. I’m very grateful to be a part of something so unique.?

The struggle for survival and harmony in a community where racial oppression has damaged traditional cultures enhances the allure of the dark side, something Justin’s character knows all too well.

?Alan is a lot like me; he’s really trying to be a good person and lead a decent life and not get sucked into all the negative stuff like his father. He’s really more like his mother in terms of aggression. But later on you see him slowly moving to the dark side as he works with his uncle, which is what his father wants.?

Justin’s own personal life once involved a potentially fatal walk on the dark side. 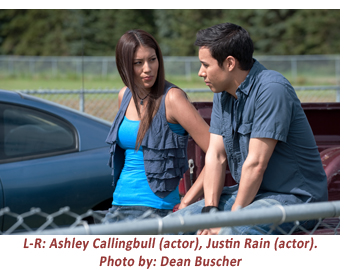 ?I went through a bad time in my life when I was in my teens. I was very rebellious and ran away from home and got into drugs,? he says. ?Eventually I overdosed and woke up in the hospital with tubes sticking out of me. It was not a good place to be.

?I decided for myself that that wasn’t the life I wanted. When I did decide to come out of it, my mom was there for me. It’s because of her I’m where I am today.

?Now I stay clean by making sure to keep that connection with my creator. I ask for guidance. I pray every morning and ask for everything to be okay and [that] I’ll be able to keep on living a good life. I experience the creator as the small voice in me that lets me know if I’m headed in the right direction or not. The world of acting can be so superficial?all about appearances?that It’s easy to get sidetracked and lose sight of why [you] started in this industry.?

(Check back next week for more from Justin Rain.) 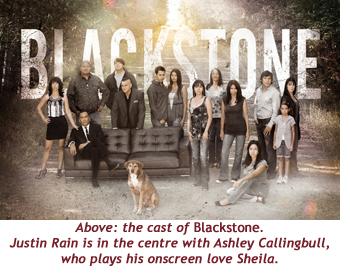