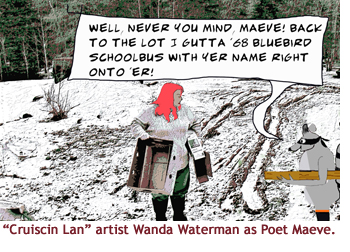 As most readers are aware, during 2012 we’re celebrating 20 years of publication. What better way to celebrate our accomplishments than by learning a little of the backstory behind some of our long-running favourites?

Last week marked the 200th strip of our resident comic, ?Chronicles of Cruiscin Lan.? This week the artist, Wanda Waterman (who also writes our ?Mindful Bard? column and several others) gives us a closer look into the world of Cruiscin Lan.

If You’re familiar with Irish folk music, you might recognize the name from the old drinking song. And It’s apt: ??Cruiscin Lan? means ?a full jug? in Irish Gaelic, meaning a full jug of Nancy Whiskey,? Wanda says. ?[It] struck me as a good name for a crazy place where anything might happen.?

And just about anything does. While the setting itself is modelled on Wanda’s hometown of Bear River, Nova Scotia, the mix of characters is unique to Cruiscin Lan?and That’s what brings the strip its charm. ?I wanted to include all the different accents and world views, and to have animals representing the different ethnic groups, like in Walt Kelly’s Pogo,? Wanda explains. ?I also wanted people mixing with the animals, like in Berkeley Breathed’s Bloom County.?

Most of the characters fit a certain type?like ?hippies, granola crunchers, revolutionaries, and right-wing extremists,? she says?and the drama in their interaction brings both humour and social commentary.

Her favourite characters? ?I identify with Poet Maeve, but I really get a kick out of Christy Minstrel and Oober Oickle,? Wanda says. ?And I adore Habibi Noor.? But She’s got a soft spot for the rest of the cast: ?I’m kind of in love with them all, for various reasons.?

Though most of the characters are typecast, one newer addition to Cruiscin Lan, Susan B. Wells, was inspired by a friend of Wanda?s: ?I decided to add a steampunk, a more recent development on the pop culture horizon. Susan . . . is based in appearance on my dear friend, the artist Susan Malmstrom, who happens to love all things steampunk and reflects it in her art.?

Wanda started drawing Cruiscin Lan in 2005 after years of looking for an artist to work with her written strip ideas. ?I’d been wanting to do comics for years,? she said, but she was unable to find the right artist partner. A new drawing program on her iMac made her dream possible?and the rest is Cruiscin Lan history. She still uses Procreate Paint Pro today when designing the strip.

?Cruiscin Lan? has taken a few hiatuses over the past seven years. In 2008-2009, Wanda published a new series, ?The Interviewer.? ?I wanted to do a more edgy strip . . . for a while,? she explains. ?The Interviewer? ran for about a year, and was followed by the popular and heart-rending ?Sister Aurora.?

?Sister Aurora? was based on a play Wanda had written. It had been ?commissioned by a local women’s centre to raise awareness for Take Back the Night,? she says. ?In the end the play never got produced because the women at the centre thought it was too violent. I thought it would make a good strip, so I went for it.?

Cruiscin Lan returned?with some layout changes?in 2010, and It’s not the only change long-time readers may have noticed.

The focus and tone have shifted over time, but it ?wasn’t really deliberate,? Wanda says. ?The strip changed as I changed, and even, in fact, as the world changed since 2005.?

As you’d expect. After all, like all good strips, Cruiscin Lan is a reflection of both the best and worst of our own society. 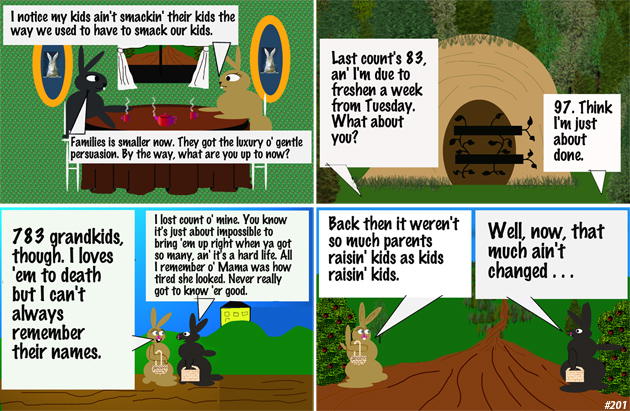