Columns
The Voice
The Mindful Bard – The Mill and the Cross 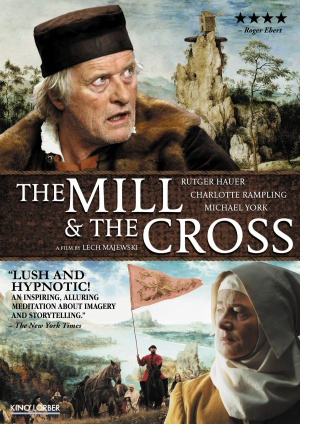 ?He is the great miller of heaven, grinding out the bread of life.?

Nicolaes Jonghelinck in The Mill and the Cross

?The Jews then responded to him, ?What sign can you show us to prove your authority to do all this?? Jesus answered them, ?Destroy this temple, and I will raise it again in three days.??

A Vivid and Poignant Metaphysics

The miller awakes at dawn and extends a great, burly arm toward his great, burly wife, who rebuffs it with a surly swat. they’re both swathed head-to-toe in wool and linen, and their bedroom is the rough-hewn wheel room beneath the windmill.

The miller rises and wakens a servant from his pallet on the floor. The servant starts the long climb up the steps within the stone mountain to start up the windmill’s blades for the wheat-grinding apparatus below. He gives a gentle tug, and the great rectangles start to move. The miller below coolly observes the wheels turning. He then sits down at his table to test the latest batch of flour, carefully rubbing it between his hands and letting it sift out, smelling it, examining the hue.

The Mill and the Cross is a film based on a painting by 16th-century Flemish painter Pieter Bruegel the Elder, The Way to Calvary (sometimes referred to as The Procession to Calvary), a magnificent panorama peopled in typical Bruegel fashion with a novel’s worth of characters, tales, and allusions. If you look closely enough you can even find the crumpled figure of Jesus, collapsed beneath the cross he’s being forced to carry.

There’s little speech in the film, meaning less to distract from the spellbinding visuals. The first words spoken are by Bruegel’s patron, Nicolaes Jonghelinck (played by Michael York), a kind of mouthpiece for the progressive values typical of both Bruegel and Majewski.

?I can’t abide by these high-handed manners,? he remarks as he watches the Spanish militia bullying the peasants. Later we hear Mary talk about her son, and Pieter Bruegel the Elder as he plans the arrangement of figures, symbols, and perspective in his painting. The only other words spoken come from the soldiers, in Spanish and without subtitles, as they cast lots and tussle over the khiton they’ve torn from Jesus.

It was a marvellous aesthetic achievement for Bruegel to have couched the suffering of the Flemish of his day in Biblical stories, an accomplishment for which he’s deservedly famous. In The Way to Calvary he depicted Spaniards as Romans and 16th-century Flemish peasants as Jews. By doing so he safely channelled the reality of the oppression of his own people into a body of work of enduring artistic value that manifested an unflinching portrayal of real human suffering.

The meaning of the film is as polysemous as its Biblical subject, so we shouldn’t make the mistake of claiming that It’s simply a film about the importance of social change. A surreal atmosphere, drawing the mind deeper into its subterranean levels, obscures the literal meaning of the story. Sure, Jesus is misquoted and portrayed as little more than a social reformer, but the symbolism of the cross and the mill are so deep as to be multi-faceted, including messages about power and control, social ties, love, sexuality, and, most saliently, the world of the transcendent and its interaction with the mundane.

The Mill and the Cross is a long strand of miraculous scenes that will haunt your dreams, a necklace whose every gem is a wondrous little planet: powerful horses that emerge like Cossack dancers from the misty plain, a flaxen-haired girl bringing a calf from a stall inside the house and with her husband’s help placing him in a basket to be taken to market, a painter carefully studying a dew-dotted spider’s web, a small windmill sitting atop a jagged stone mountain whose phallic shape is totally at odds with the surrounding landscape . . .

The Flemish in the movie both identify with and repel the Christ just as did the Jews in the Gospel story, despising the occupation even as they are willing to use it to further their own ends, and raging against the oppressor while remaining silent if only to be allowed to go on participating in the natural cycles of daily life.

The peasants are unusually cavalier about the traumatic events visited on them, and this adds to the dreamlike atmosphere. The young woman’s beloved husband is tied to a wheel and impaled for raven-fodder, and she weeps quietly on the ground. After the crucifixion the peasants dance in a circle, then wander away spinning their arms, aping the motion of the windmill.

The cross has long been seen as a symbol for the intersection of heaven and earth?of the spiritual and the carnal?with all the terrible suffering and misunderstanding that this meeting entails. The windmill, which in this particular mythos represents a turning cross, suggests the cyclical nature of human sacrifice. We can expect that we will be oppressed and that we will suffer. Life goes on, struggles come and go, and the great sky miller continues grinding out the grain for our bread.

The Mill and the Cross fulfills eight of the Mindful Bard’s criteria for films well worth seeing: 1) it is authentic, original, and delightful; 2) it poses and admirably responds to questions that have a direct bearing on my view of existence; 3) it stimulates my mind; 4) it harmoniously unites art with social action, saving me from both seclusion in an ivory tower and slavery to someone else’s political agenda; 5) it inspires an awareness of the sanctity of creation; 6) it displays an engagement with and compassionate response to suffering; 7) it makes me want to be a better artist; and 8) it makes me appreciate that life is a complex and rare phenomenon, making living a unique opportunity.

From Where I Sit – Consider